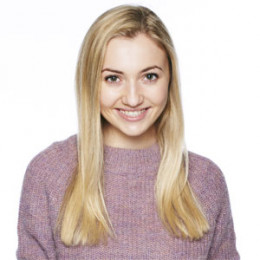 Tilly Keeper is a 20-year-old English actress who is best known for portraying the character of Louise Mitchell on the BBC One soap opera, EastEnders. She started her acting journey playing as a member of the Sovereign's team at an early age of 12 and gained public attention after her television debut in 2016.

Matilda 'Tilly' Keeper was born on August 16, 1997, in England. She is the daughter born to  Peter Keeper, one of the Spitting Image writers. Her birth sign is Leo. Regarding her nationality, she is British and belongs to the white ethnicity.

Keeper grew up with her older brother in London. She studied at the D&B Academy of Performing Arts School in Bromley for 14 years. Later, she went to Bromley High School when her parents shifted to Chislehurst. She started taking ballet class since the tender age of 4.

Keeper began her professional career in 2009 with the TV show, Oliver!. She played the role of one of the members of Sovereign's team. She was first noticed after her role in 2016 in an episode of Millie Inbetween.

Later, she was cast in the 2016 British soap opera, EastEnders portraying the character of 14 years old Louis Mitchell. She made her appearance in the commercial ad of Oral-B and played a role in the short film named Female Dog as well.

Tilly, 20, is unmarried and has no children yet.  She currently resides in London. She cites her favorite movie as Breakfast at Tiffany's (1961).

She is confidential regarding her private stuff. She has posted many photos on Instagram with her male friends but has not confirmed about having a relationship.  In 2017, she attended the wedding of EastEnders' co-stars, Jacqueline Jossa to Dan Osborne.

Considering her amazing career, she might have earned an impressive sum of money from her career.

However, her exact net worth has not been revealed but is assumed to be in seven digit number. She has thousands of fan following on social sites.