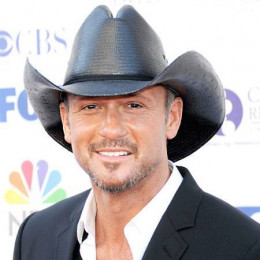 Samuel Timothy McGraw is an American singer as well as an actor. Till date he has released his thirteen studio albums. He has also seen in films like The Blind Side, The Kingdom, Four Christmases, Friday Night Lights etc. Elizabeth, his mother was a waitress. He had attended Terry Parker High School. He had attended Florida Community College for only one term. He occasionally sat in with the local bands. Later on he dropped out of the college to pursue his musical career.

MacGraw has married to his fellow country singer. They have three daughters together. Other than his wife there is no any information or rumor about his affair or any relationship. It seems like he wants to keep his personal life in low profile. He loves his wife very much and living happy life with his wife and three daughters. He owns a single engine Cirrus SR22 and hold a private pilot license.

MacGraw has married to his fellow country singer. Her name is Faith Hill. They have three daughters together.

From his three daughters his first daughter was born on 1997. Her name is Gracie Katherine McGraw .

His second daughter was born on 1998. Her name is Maggie McGraw. She is attending higher school.

His third daughter was born on 2001. Her name is Audrey Caroline. Currently she is attending school.