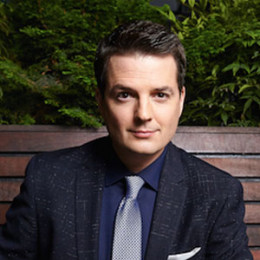 Canadian actor and television personality, Todd Talbot is best known for his work as one of the co-hosts of "Love it or List it Vancouver" which airs on the W Network in Canada and HGTV in the U.S. Talbot is also known for playing Matt Walker in the Canadian teen soap opera Hillside. He also contributes online blogs to the W Network.

Todd Talbot was born on June 12, 1973 in Vancouver, British Columbia, Canada to Janey Talbot and John Talbot. He has two siblings Anna Talbot and Jill Talbot.

He started his acting career in 1991 in the Canadian TV series Hillside along with Ryan Reynolds. He worked in the series until 1993 and then traveled to England to study acting, singing and dancing.

Talbot has a keen interest in theater and he has  performed all over the world. Later he recturned to the TV world and apperaed in numerous TV series. In 2013, he signed on to co-host Love it or List it Vancouver. He also worked for online blogs to the W Network.

Todd Talbot has an etsimated net worth of $700k. He earned a goos sum of amount from his appearces in Tv series and movies. As per some onlone sources he earned $70k-$80k from TV shows.

Todd Talbot is happily married to his lady love, Rebecca Talbot, a singer, and model. The duo exchnaged a vow in March 2, 2007. The couple met in Todd Talbot while playing Maria in "West Side Story" play. The duo is blessed with two children, a daughter and a son.

Talbot is active in the instagram where he ma more than 58k followers. He often posts his family pictures on his Instgram,

Such a cool evening. We are celebrating our family haircut extravaganza @sukissalons with a thoughtful and special reason courtesy of Ashlyn. Stay tuned... the team @sukisdowntown embraced this idea and were so supportive. Thank you!!  check out @rabeccaelizabeth for a SUPER cute pic of the kids hair!! #tongueouttuesday

Donna Murphy married with Rebecca Codling, a singer, and model since March 2007.The couple has two children.