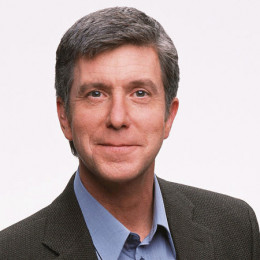 An American television personality and game show host who is widely known as TV host of America's Funniest Videos, Hollywood Squares and Who Wants to Be a Millionaire. He is son to Catherine Bergeron and Raymond Bergeron. He started his career as disc jockey at local radio station WHAV, which was located in his hometown. In 1980 he earned more popularity after worked as radio DJ in the Seacoast area of New Hampshire. He was also former host of popular series Dancing with the Stars. He also hosted Granite State Challenge, on New Hampshire Public Television. During his career he has been awarded with both a Daytime Emmy Award and a Primetime Emmy Award.

Talking about her relationship he is married to his longtime sweetheart. Together they seem to be very happy with each other and till now there has been no rumor or report of any conflict and affairs from both sides which suggest that they are having very happy married life. The couple has been blessed with two beautiful daughters. The family is happily residing in Greenwich, Connecticut.

She is very gorgeous. Her picture along with him during different events can be found in different sites. She has given birth to two daughters.

She is the eldest daughter of the family. She is gorgeous and beautiful.

She is the youngest daughter. She resembles more like her mother.