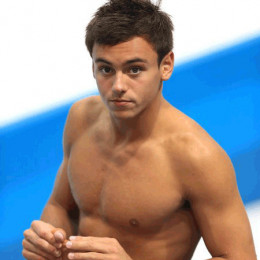 An English diver and television personality who is better known as professional diver who won two gold medals at Commonwealth Games which was held in 2010. He is son to Debbie Daley and Robert Daley. From his young age he was inspired by Canadian diver Alexandre Despatie whom he told know as his inspirational hero. He started diving when he was just 7 years old. After he was discovered in 2002 he was placed in competitive squad at National Novice Championships where he won a medal in the 8 to 9 year old boys' category. He also represented United Kingdom at the 2008 Summer Olympics where he was the youngest competitor. Beside diving he has also appeared in popular reality TV show Splash!.

Tom is openly bisexual. He has been dating man and he was recently got engaged with his current boyfriend who is famous gay screenwriter. In an interview he stated that he has never been happier and he had very tough decision speaking out about his private life in public. Prior of being engaged with his current partner he was in relationship with his girlfriend who was also diver. But since he was bisexual their relationship didn't worked out well and they broke up.