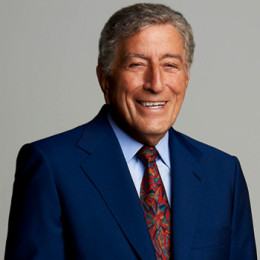 A singer of traditional pop standards, Tony Bennett is the son of grocer John Benedetto and seamstress Anna Suraci. He attended New York's School of Industrial Art where he studied painting and music.

He is well-known legends of jazz and popular music who served during the Second World War. After the WWII, Bennett sang with the Army military band under the stage name "Joe Bari" until his discharge and return to the US in 1946.

Tony and Sandra has two children, Antonia Bennett, a singer of adult alternative music, born on 7th April 1974 and Joanna Bennett an actress, born in 1970. Tony Bennett's current wife Susan Crow is a folk singer-songwriter, and they wedded on 21st June 2007.

Tony Bennett was previously married Patricia Beech on 12th February 1952 and divorced in 1971.The couple has two children .

He married Sandra Grant Bennett, an actress on 29th December 1971 and divorced in 1984.The couple has two children.

Currently, he married Susan Crow on 21st June 2007.The couple are spotted in many places by social media.

Their son Dae Bennett, an audio engineer was born in 1955.

Their son named Danny Bennett, a television producer was born in 1954.

Their daughter Antonia Bennett, a singer of adult alternative music was born on 7th April 1974 .

The couple has a daughter named Joanna Bennett ,an actress born in 1970.