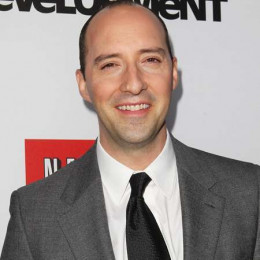 An American actor who is better known for starring in the role of playing the socially awkward and unstable Buster Bluth on the series Arrested Development. He is son to Rita Hale and Mike Hale. He attended Young Actors Theatre where he attended many theatrical plays and musical productions. In 1988 he graduated from Leon High School and he earned journalism degree from Samford University. He started his career through minor roles in TV series like Dawson's Creek, The Sopranos, and Sex and the City. Currently he is starring in the role of Gary Walsh on the HBO comedy Veep. He has won Primetime Emmy Award for his best supporting role in a Comedy Series two times in 2013 and 2015.

He is a happily married man which concludes he is not a gay. He has found perfect match for him because his wife is as talented as he is. She is also Emmy Award-winning make-up artist. Beside her he has not dated anyone. It seems like he is very loyal to his wife. Together the couple is blessed with one beautiful daughter. Since he has very healthy relationship with his wife there is no chance of their divorce. Currently he along with his family resides in Baltimore, MD.

Professionally she is a makeup artist. She is very gorgeous. Together they make a very cute couple. She has given birth to one daughter.