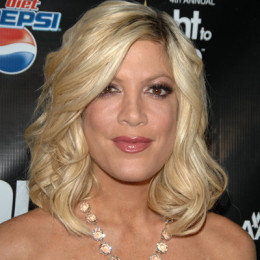 Victoria Davey Spelling commonly known as Tori is an American actress and author best known for her roles on films like Trick, Cthulhu and The House of Yes. Her first major role was as Donna Martin on Beverly Hills, in 1990. She is the daughter of Aaron Spelling, a television and film producer and Candy spelling. She attended Beverly Hills High School and graduated from Harvard-Westlake School in 1991.

She has won the Young Artist’s Best Young Actress Guest Starring in a Television Series Award in 1991. Also she was nominated for the a Golden Satellite Award. She has gone through small plastic surgery on her nose after a parrot bit her. Her first marriage was a lavish one of a $1 million ceremony with an actor, but didn't last long and got divorced. After that she got married again and have four children from this marriage. Her second marriage is also going through a lot of complications and has filed for divorce.

He is an actor and playwright. The couple married with a huge celebration among various popular face.

He is a Canadian-American actor best known as the host of the cooking competition Chopped: Canada. He played the role of Constable Renfield Turnbull on the TV series Due South.

He was born healthy with the weight of 6 lbs. 6 oz. He is often pictured with his mother.

She was born healthy with the weight of 6 lbs . 8 oz. She is often pictured with her mother rather than father.

She was born safe and healthy with the weight of 6 lbs. 14 oz. She is happy being with her parents.