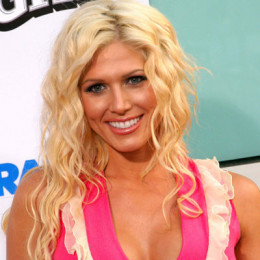 An American model, an actress, a fitness competitor and also a former professional wrestler best known for her time in WCW and WWE diva. According to her she was extremely shy girl when she was child. She also indulged herself in activities like dance, cheer leading and track and field activities.she completed her studies from Boise State University in U.S.A. She has also appeared on the cover ofpopular magazines like FHM and Playboy.

In year of 2006 there was rumor that she was fired from WWE but later she denounced the rumor that she couldn't appear due to some personal problems. Regarding her marital status she legally married her longtime boyfriend but the couple divorced after four years of their relationship. After her marriage she has an affair with couple of guys. She has not yet been a biological mother.

They had started dating since 1999 and later converted their relation into marriage but unfortunately they divorced after 5 years of their marriage.