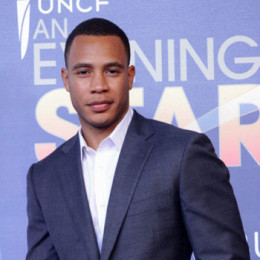 He is an American actor who is popular among his fans for starring in the role of Andre Lyon on the Fox series Empire. He completed his high school from Georgia. He completed his graduation from the University of Kansas with a bachelor's degree in communications. He also went to American Musical and Dramatic Academy in Los Angeles. In 2011 he made his first debut in big screen by starring in ABC daytime soap opera, All My Children. Since 2015 he has been working on music-industry primetime soap opera, Empire.

Byers is a happy married man. He tied the knot to co-star Grace Gealey in an intimate ceremony in a mansion on Grand Cayman Island on 14th April 2016.

"God is so good. To all who have extended congrats and well wishes, we thank you from the bottom of our hearts. Love, Mr. & Mrs. Byers."

'It was a beautiful wedding filled with family and close friends. Some cast members from Empire were there. Grace looked stunning.'

The couple who celebrated two years marriage anniversary in April 2018 is so much in love. Trai shared a heartfelt story of their journey and the moment when he realized that she's the one made for him.

"I remember being caught in your eyes, and deciding I would never leave. I remember watching you dance the Bachata, and thinking I want to be the man you dance with. I remember sitting next to you at the “Selma” premiere, I was so nervous and I wanted to impress you. I remember when you looked me in the eyes and told me what I’d waited my whole life to hear, “I’m ready”."

'God remains the tether that binds us together. Two years feels like two seconds for me with you. I’m caught in your love, and I’ll never, ever leave. Happy Anniversary My Blessed Queen. I love you now and forever!'

The lovebirds are having a great time together. Still, they have no plan to extend their family and bear a couple of kids.

He completed graduation from the University of Kansas with a bachelor's degree in communications.

Later, he joined the American Musical and Dramatic Academy and the Yala School of Drama.

He is best known for portraying the role of Andre Lyon in the Fox TV series Empire since 2015.