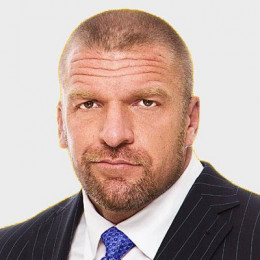 Paul Michael Levesque commonly known by his ring name Triple H, is a business executive, professional wrestler, and former bodybuilder. He studied at art school and graduated in 1987, while managing and consulting a prestigious fitness club. In 1988, he was crowned with the title of Teenage Mr. New Hampshire. Today he has made himself stand in the position of most acclaimed star in the world of wrestling.

He began to take up bodybuilding class from the age of 14 and had a keen interest on being a wrestler. He has been crowned King of the Ring in 1997 and has earned ten WWE world championships as well. He had once been in a long time relation with a WWE sexy diva but due to some issues they broke up. After that he dated another girl who is a daughter of wrestler as well and got married with her. They together have three daughters.

She is the current Vice President of the WWE and the daughter of Vince McMahon, Ex-CEO of WWE.

She is a cute adorable child, born healthy and is happy with her romantic parents.

She is beautiful as her mother and is often seen picturing with her parents and sisters.

She is the youngest child who is often seen in her masculine dad's arm.