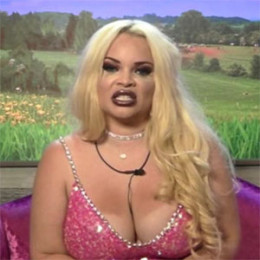 American actress, Trisha Paytas, has appeared in over 45 television series. She is a popular internet personality, singer, and songwriter as well. She rose to fame after appearing popular TV series such as My Strange Addiction, Dr. Phill, and America's Got Talent. She has a YouTube channel named blndsundoll4mj, which has more than millions of subscribers.

Trisha Paytas was born Trisha Kay Paytas on May 8, 1988, in Riverside, California. She belongs to the White-American ethnicity/race and holds American nationality.

Paytas is the daughter born to Frank Paytas and Lenna Paytas. She has two siblings, Kalli Metz, and Nick Paytas who are also internet personality.

Paytas completed her graduation from the ‘Pecatonica High School’ in Illinois. She later moved to Los Angeles to pursue a career in acting. She spent her initial years as an extra, with blink-and-you-miss-it roles that went unnoticed.

Trisha Paytas first worked as lingerie model and dancer before pursuing an acting career. She also worked as a call girl and stripper to support herself to her career.

In 2006, Paytas made her first onscreen debut, The Greg Behrendt Show as a correspondent alongside American comedian, Gregory Behrendt.

The following year, Paytas made an appearance in the second season of a reality show, Who Wants to Be a Superhero?.  The same year, she started her YouTube Channel, blndsundoll4mj. The channel has successfully earned millions of subscribers. She gives relationship advice, beauty, and fashion tips on her YouTube channel.

Later on, Paytas featured in the several television series and movies including, Modern Family, Faster, Huge, The Ellen DeGeneres, To Get her, and Geezas.

Besides, Paytas also released singles such as Daddy Issues, Hot For Teacher, Cinderella, Warrior and so on. More recently, she released the music videos like Freaky, I Hate My Life, Silence and I Love You, Jesus.

Trisha Paytas is possibly single at the moment. She previously had relationships with several men. She has posted many pictures with her male friends on her Instagram account. However, she has not confirmed her relationship.

Some online sources have revealed that Paytas dated an American actor, Anthony Michael Hall in 2008. The former pair remained together for almost five years and separated.

Right after separating from Anthony, Paytas dated with Roger Bart, an American actor, known for his role in the film Speech & Debate. However, their relationship lasted for only two years.

Paytas then had an affair with American Dancer, Sean van der Wilt in 2015 but eventually separated after dating for a year.

Besides her affairs, Paytas has also been linked with celebrities such as Aaron Carter, Dale DaBone, Nic Nemeth, David Lipper, Phil Varone, etc.

Trisha Paytas makes a tremendous amount of money from her multiple careers. She earns more than $35,000 per month through her video blogs. Besides, she also earns $25000 from her endorsements.

Currently, Paytas lives in a luxurious villa in Los Angeles worth around $1.5 million. According to her, she was once paid $66.7 k to spend a night with a famous basketball player. She has the net worth of $4 million.