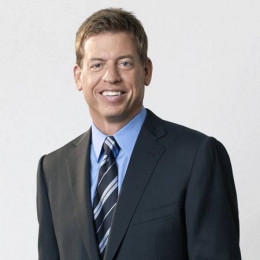 He is the prestigious and renowned person in American football who is widely known as former American football quarterback who has given his complete 12 years of his career for the Dallas Cowboys. He attended attended University of California Los Angeles. In 2000 he got retired but he kept himself busy by joining the Fox network. He currently works as small screen sports journalist for the Fox Channel. Beside that he is also partner of the San Diego Padres.

Troy Aikman was married to his lover Rhonda Worthey but his current marital status describes him as a divorcee. They were parents of two beautiful daughters.

There was a high rumor going on that he is gay but he had turned down the rumor saying he is not gay. In 1998 he underwent surgery in order to remove a malignant melanoma from his left shoulder blade.

Aikman divorced his ex-wife and married Capa Aikman in September 2017. They celebrated their first marriage anniversary in September 2018 sharing an adorable Instagram post of their wedding.

Troy Aikman holds an estimated net worth of $25 million.

Troy Aikman was born on November 21, 1966, in West Covina, California.

Professionally, she is the ex publicist of Cowboys. After 11 year of their relationship, they got divorced. She has two daughters from him.