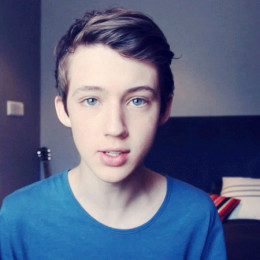 Troye Sivan Mellet is an actor, YouTuber, singer and songwriter. His first debut acting role was in the 2009 film, X-Men Origins: Wolverine, where he played as young James Howlett and recently he has appeared in the Spud film trilogy. He posts video on YouTube quite often which has helped him earn millions of subscribers and viewers. He is the son of Laurelle and Shaun Sivan. He was named one of the "25 Most Influential Teens of 2014" by Time.

Accounting his personal life, he hasn't married anyone yet as he is too young to get married. As of August 7, 2010, he publicly announced himself as a Gay by making a video and uploading it to his YouTube channel, entitled "Coming Out". He is often rumored of dating a girl with whom he is often seen in Instagram and Twitter. Till now there is no record of his girlfriend.