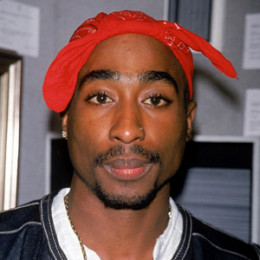 Tupac Shakur, most recognized by his stage name 2Pac, was a highly successful rapper and actor known for his violent and shocking lyrics. He was an accomplished rapper who earned a critical acclamation for his works like All Eyez on Me and Me Against the World.

Tupac Shakur popularly known as 2pac was born Lesane Parish Crooks on June 16, 1971, in East Harlem, New York, U.S. He was the son of an active member of Black Panther Party in New York, Afeni Shakur and Billy Garland. He grew up along with his stepbrother Mopreme "Komani" Shakur and half-sister, Sekyiwa. He grew up among the people who had were convicted of serious crimes.

Shakur attended prestigious Baltimore School for the Arts. He won several singing competitions while in school. He went to Tamalpais High School.

Tupac was a professional rapper. He began his music career in 1990 working with alternative hip hop group Digital Underground as a roadie and backup dancer. He made his recording debut in 1991 on Same Song. He served the team for the soundtrack of the movie Nothing but Trouble and featured in the film. The same year he released his solo album 2Pacalypse Now.

Shakur's second album Strictly 4 My N.I.G.G.A.Z was released in 1993, which debuted at number 24 on the Billboard 200. It included hits like Keep Ya Head Up, and I Get Around. He is the founder of the group entitled Thug Life along with Big Syke, Mopreme Shakur, Rated R and many others. The group released their album Thug Life: Volume 1 in 1994 which was certified Gold in the U.S.

Tupac's third album Me Against the World released in 1995 when he was in prison. The album became one of his most successful work. It ranked number one on Billboard 200 and was considered the magnum opus of his career.

The following year his fourth and last album during his lifetime entitled All Eyez on Me was released featuring five singles including How Do U Want It and California Love. The album went multi-platinum after a month of its release.

Shakur's fifth album The Don Killuminati: The 7 Day Theory was released two months after his death.

Tupac achieved a lot throughout his career. He was the recipient of the 1996 Soul Train Music Award for Best Rap Album for Me Against the World. In 1997 he won the American Music Award for the Favourite Rap/Hip-Hop artist posthumously.

Tupac was a married man. He married his longtime girlfriend, Keisha Morris in 1995. The couple first met at the nightclub. They married when he was behind bars at N.Y.’s Clinton Correctional Facility. The duo remained together until the death parted one of them apart.

Tupac had been involved in multiple criminal offenses and imprisoned for his crimes. In 1994 he was sent to jail for 15 days for assaulting the director Allen Huges after getting fired by him from the movie Menace II Society. He was also shot in an armed robbery case whereas went to prison for the sexual assault charge. Even at the time of his imprisonment he read a lot of books and continued working on his music.

The country lost the talented personality Shakur on September 7, 1996. He died the painful death after six days of getting shot in Las Vegas. He was on a drive with Suge Knight while getting shot four times, one of which went into his right lung. He died of internal bleeding after being kept on a life-support machine and under a barbiturate-induced coma for several days.

Tupac earned a lucrative amount from his career when he was alive. He held the staggering net worth of $40 million.

Keisha Morris was a lovely wife of Tupac Shakur. The duo remained husband and wife until Tupac's last breath.