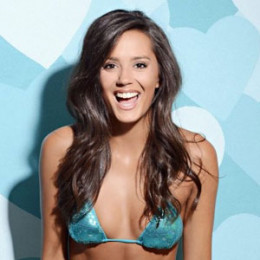 Tyla Carr is a British model who rose to fame as a participant on the ITV2 reality series Love Island. Apart from this, she was seen in the dating game show called First Dates.

Born on 29th January 1993, Tyla Carr is a daughter of Johnny Carr and Carrie Carr. She grew up in the city of Surrey, England along with younger sister Tasha. She belongs to white ethnicity.

From her childhood, she was passionate about modeling and her first television appearance was in 2016 on the show First Dates, where she went on a date at the Paternoster Chop House with Bobby from Essex.

She began her career as a model prior being the part of the reality show First Dates, where she went on a date at the Paternoster Chop House with Bobby from Essex in 2016.

Though the First Date was her debut show, she rose to a fame after appearing on the ITV2 series Love Island. She spent around £3,000 for her cosmetics products and clothes while she participated in the show.

It is also one of the hot and heavy sex scenes TV show where the contestants are encouraged to pair up and convince the public that they have found a love partner. In the show, she was coupling up with contestants, Jonny Mitchell, Dom Lever and Simon Searles. She last appeared on the cover of the Daily Star on 23rd June 2017.

Before Mike, she was is a love affair with Kevin, 39. He was her blind date but later she broke up with him after knowing he already had a wife.

As a popular reality star, Tyla has earned a good sum of money. To achieve huge name and fame in short period of time is one of the challenging things which she proved after participating in the reality show, Love Island. Her actual net worth is not yet disclosed but looking at her lavish way of life she must certainly have a good net worth.