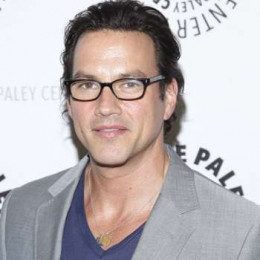 Tyler Christopher is an actor of American nationality known best for his portrayal of Nikolas Cassadine in the ABC soap opera General Hospital. He was born in Joilet, Illinois and was educated in the Ohio Wesleyan University before he dropped out of. He has also known for having appeared in Charmed, Angel, The Pretender 2001 and many other TV shows which have been well known.

Christopher has been known well also in regards to his personal life. He has been married twice and divorced once. He is married as of now and seems to be happy with his spouse. He has also had two other well-known relationships. With his present wife, he has two children and the couple and the family seem to be getting along pretty well together and are not heading towards divorce.

The pretty actress Eva Longoria was married to Tyler Christopher for a duration of two years after which they got a divorce.

Actress Brienne Pedigo is the wife of Tyler as of now. The couple has two children together and seems to be doing pretty well.

Brienne and Tyler's second child is a daughter Boheme.