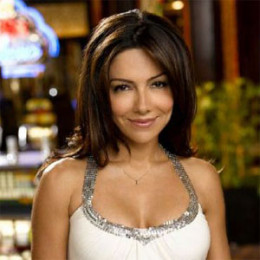 American actress, Vanessa Marcil acted in many theater productions before landing the role of Brenda Barrett on the soap opera 'General Hospital'. She is best known for her television roles as Brenda Barrett on 'General Hospital' as well as Gina Kincaid on 'Beverly Hills'. Vanessa made her feature film debut in the film 'The Rock' (1996), appeared opposite of Nicolas Cage, Sean Connery, and Ed Harris. born on 30th March 2002

Vanessa Marcil was born Sally Vanessa Ortiz on October 15, 1968 in Indo, California, USA to  to Patricia Marcil, an herbalist, and Peter Ortiz, a contractor and self-made millionaire. She holds American natioanlity and belongs to the mixed ethnicity/race (Mexican, French and Italian ancestry).

Vanessa Marcilo started her acting career in 1992 in soap opera, General Hospital where she played the role of Brenda Barrett.  She earned three Emmy's nominations for her role and sucessfully won  in 2003 as Outstanding Supporting Actress. In 1998, she received Outstanding Lead Actress at the Soap Opera Digest Awards.

Marcil featured in the  Prince music video "Poorgoo". In 1996, she debuted in film, The Rock along with  Nicolas Cage, Sean Connery, and Ed Harris.

Vanessa Marcil was previously married Corey Feldman, an actor in 1989 and divorced in 1993. The couple were together for four years.

She married Carmine Giovinazzo, an actor on 11th July 2010 and divorced in March 2013.The couple were together for three years.