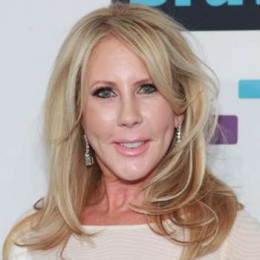 Victoria "Vicki" Gunvalson is an American reality television personality. She is best known for her starring role as a “housewife” in the Bravo reality television series The Real Housewives of Orange Country. She has also played in several other series and short movies. She grew up in Chicago with her four siblings. Her father William J. Steinmetz was a holder to a big construction company and her mother Joanne Steinmetz was a housewife.

Vicki got married twice in her life. She divorced her two husbands due to disputes in the day to day life and different way of lifestyles. Her current relationship status is single. She has a daughter from her first husband. She raised her herself. Vicki is found with men sometimes in public places and certain functions. They are rumored as her boyfriends but according to Vicki, she is good as single. She had experienced married life with two men that might be the reason she doesn’t want to be in relation. She is single and happy women.

Vicki and Michael were in relation for long time. Michael had two children with her. His alcoholic habit was the reason of separation.

Donn Gunvalson second husband of Vicki was working in the same field. He is of Caucasian ethnicity.

He is the first children to his mother. He is currently in California with some jobs.

She is the second child. She is married to some military officer whom she hadn't revealed in public.