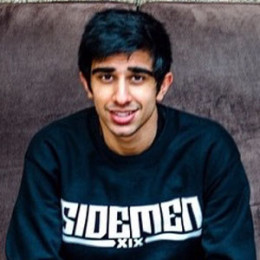 Vikram Barn born on August 2, 1995, in England is a YouTube gamer and gained huge fame for posting videos featuring games like GTA and Minecraft.

The famous British-Indian YouTube gamer Vikram Barn is best known for his channel, “Vikkstar123” where he uploads videos presenting the games Grand Theft Auto, Minecraft, Call of Duty, Battlefield, and much more.

The 21-years-old Vikram Barn belongs to English-Indian ethnicity and holds English nationality. He grew up in Sheffield along with his brother and his Indian parents. He completed his high school at his birthplace. Barn was offered admission in the University College London, but he declined it as he wanted to focus on YouTube.

At the age of 15, when Barn was in high school he developed a keen interest in YouTube. After finishing his high school, he kept uploading videos of his gameplay, people liked his worked and gained many subscribers.

Vikram created his first channel named, “Vikkstar123” on 12 April 2010 and uploaded his first video in June in that year. He posted few of the videos for Grand Theft Auto and enlarged his admiration to the huge fame. It was believed that he had a sheer interest in pursuing a career as a YouTuber. Apart from that, he was also a “Twitch TV” live streamer based in the United Kingdom.

Vikram has two other channels named “Vikkstarplays” and “Vikkstar123hd” with more than 1.5 million subscribers. Moreover, he has cooperated with internet sensation “Bodil40” to make few of his videos.

A few years later, Vikram met the future members of Sidemen. He first met JJ at a game fest, and through JJ, he met Simon, Ethan, and Harry. They together decided to form the “Sidemen Crew.”

They together as a crew stormed YouTube. They often go on tours and take up experiments and challenges on their channels too. Barn is consistent with his uploads and motivates his team too.

Vikram is an unmarried and still single. Well, there aren't any rumors regarding his relationship with anyone. However, Barn has millions of girl fans who are crazy about him, and he is breezy and casual when conversing.Maybe he is just focused on building his career.

The talented and hardworking Barn has estimated net worth of thousands of dollars. Most of his earnings come from the videos uploaded on YouTube.