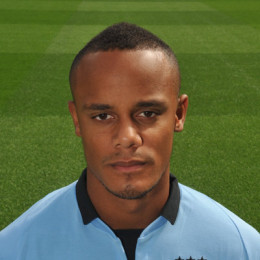 Vincent Jean Mpoy Kompany is a Belgian professional football player. He plays as a captain for Belgium national team and also for Manchester City. He can play both as center back as well as defensive midfielder. He is an owner operator of two Belgian Sports Bars which name is Good Kompany. He is also chairman of Belgium D3B Division club named BX Brussels.

There are no rumor about his linkups with anyone. He is happily married. There are no rumors about the couple getting divorce too. The couple has two beautiful child.In his career he has won many awards. In 2004 he had won Belgian Golden Shoe, Belgian Young Professional Footballer in both 2004 and 2005 year. He has also won the Belgian Ebony Shoe in 2004 and also in 2005.

The couple has two children. His first child is a baby girl and her name is Sienna.