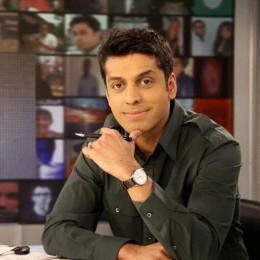 He is a journalist, a TV host, a consultant for the U.S. State Department who is currently working at Al Jazeera America. He is widely known as the co-host of Al Jazeera America's The Stream. His parents immigrated from Pakistan to United states. Beside journalism, he is also an author of the book named The Domestic Crusaders which is about the first major play about Muslim Americans, post-9/11. For his hard-work he has been honored with Shorty Award for Best Use of Social Media for News in 2014.

Exploring his personal life, he is no more single. He is already tied in knot with his longtime college sweet heart. They are happily married and until now there has been no reports of any kind of extra marital affair fro both sides which suggest that both of them are loyal to each other. Recently they have been blessed with a child. They haven't disclosed the name of the child yet. Information on other personal life of him is not made public.