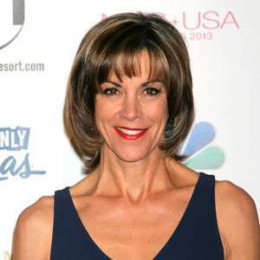 An American actress, voice actress, and former fashion model, best known for her roles in television comedies, Wendie Malick, is currently married to an actor Richard Oscar Erickson on 29th December 1995. Wendie is the daughter of Gigi, a former model, and Ken Malick, who worked in sales. She graduated from Williamsville South High School. Wendie was nominated for two Primetime Emmys and a Golden Globe Award.

Wendie Malick married twice. She first married to an American movie producer, writer, and actor Mitch Glazer.The couple married in January,1982 and divorced on 19th November 1989. Wendie is a member of Pi Beta Phi sorority. Malick has involved in social works too, she is on the board of directors of the Environmental Media Association as well as the board of advocates for Planned Parenthood, and the advisory board of the Humane Society.

She first married to an American movie producer, writer, and actor Mitch Glazer. The couple married in January 1982 and divorced on 19th November 1989.

She second married to an actor Richard Oscar Erickson. The couple married on 29th December 1995. There is no information about their children in social sites.