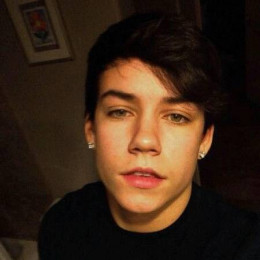 He is a popular Viner, who has already crossed 35,000 followers in Vine. His blog on Tumblr helped him a lot to get more popularity. He posted his first vine video in August 2013. He has also covered Shawn Mendes songs in 6 seconds vine video from which he got more famous. He is an avid fan of lacrosse. Studying business administration in the college is his future plan for taking his career along.

Wesley Tucker was born on June 11, 1997, in Arizona the USA under the birth sign of Gemini. He is American and belongs to the White-American ethnicity. He was raised along with his siblings in Los Angeles. Tucker completed his schooling at the local school of Los Angeles.

Wesley Tucker is a popular social media personality. He rose to fame after his tweet, ‘If you don’t have anything nice to say don’t say it at all' become viral. Later he went to open his Instagram and YouTube. Tucker is quite popular in Vine too, he has thousands of followers oh his vine.

In 2014, Tucker started his self-titled YouTube channel, Wesley Tucker where he posts his cover song videos. He has more than 23k subscribers.

Wesley Tucker is transgender which he admitted in back 2013. He is quite secretive about his love life and prefers to keep his private life away from the limelight of media. He is possibly single at the moment.

Tucker is one of the rising social media stars. He has garnered good sum of the amount from his career. Believing some online sources, his estimated net worth is in six digit figure but no official confirmation has come about it.