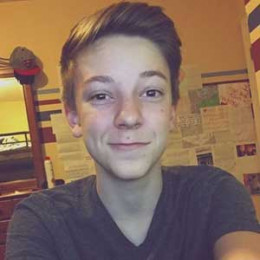 A social media sensation, Weston Koury is well known as a YouNow entertainer who began broadcasting in mid-June 2015. He has earned more than 550,000 fans on the network also became active on YouTube, Instagram, Snapchat, and Twitter. Weston is best known as Young and talented artists who used the power of the internet to get famous without being affiliated with any agents or media agencies.

Weston Koury was born on 7th January 2002, in North Carolina. He has an older sister Kalynn Koury and has featured in a few of his 'YouNow' broadcasts. Koury holds American nationality and belongs to white ethnicity.

After his keen interest in music, his parents brought him drums at the age of eight. He played the drums daily and also practiced singing along with playing other musical instruments.  He then started posting his music performance on social media after getting some command over music.

His family parents and sister started participating in his performances and also were very supportive of his internet career.

Weston earned more than 550,000 fans also became active on YouTube, Instagram, Snapchat, and Twitter. He became an artist who used the power of the internet to get famous without getting associated with any agents or media agencies.

He used Vine and YouTube to his advantage and became one of the most successful young musicians in the USA. He is also a year-round competitive swimmer and freestyle being his favorite stroke.

Weston booked his first official Meet&Greet in Texas in November of 2015 with Corbyn Besson and AlexFromTarget within four months of being a YouNow broadcaster.

He is relatively new to YouTube, but he is already creating a buzz since he joined in February 2016. He rose to fame with his YouNow account which has close to 4 million views and 159K fans.

Well, Weston is still very young to marry and settle down. For now, he is happy with his relationship.

Koury is a rising star in the social media, and he recently joined YouTube as well. He has just started his career, so maybe he has a net worth in about five digits.