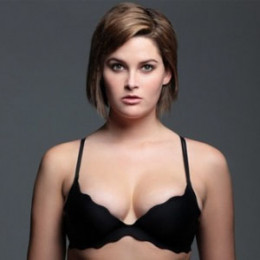 Whitney Thompson is the first plus-sized model to win the America's Next Top Model. The beautiful Thompson has done campaigns for clothing store 'Forever 21' and lingerie company 'Panache' and shot a commercial with pop star Rihanna. She is well known as American fashion model. She is a real inspiration to many plus size model of America.

Whitney Thompson was born on 26th September 1987 in Atlantic Beach, Florida, U.S. She is a daughter of David Thompson, the Atlantic Beach Police Chief.

She attended Duncan U. Fletcher High School and also joined the University of North Florida, where she was a member of Alpha Chi Omega.

While at Fletcher High School, she was the water girl for the football team. She also performed in Youth of the Beaches Art Guild productions and also modeled for other events in Jacksonville.

Whitney Thompson began her modeling career at the age of fifteen, she made a local name for herself and appeared on the cover of the October issue of 'Jacksonville Magazine.'

She made it to the finale of 'America's NextTop Model' and got a chance to enter the Top Model house. But she was criticized by the judges and landed in the bottom two with contestant Lauren Utter.

Thompson won the first call-out during the music-themed photo shoot, and won one CoverGirl of the Week title, from the final photo-shoot challenge of cycle 10. She ended up in the bottom two for a total of four times, but at last, she was the winner of the show. She was the first plus-size model to win the contest.

Her prize included a contract with CoverGirl cosmetics and a contract from Elite Model Management. She also won the cover, and six-page editorial spread in the July 2008 issue of Seventeen magazine. Her 'CoverGirl' contract included US national TV commercial, print advertising, and a billboard in Times Square.

Besides being the winner, she also is a spokesmodel for Smile Stylist and has modeled for re-known brands such as Converse, Forever 21, JC Penney, Saks Fifth Avenue and much more. Thompson has also been in covers of, Plus Model Magazine in January 2010 as well as Animal Fair Magazine, and Supermodels Unlimited in September/October 2008.

She featured in the June 2008 issue of 'In Touch Weekly', an ad with Metro style, the cover of Jacksonville Magazine, Fashion Bug. She launched a jewelry and candle collection called Supermodel in 2009.

Thompson is also an ambassador for the National Eating Disorders Association and a spokesperson for the Right Fit brand of Fashion Bug.

In 2008 she was given the title of the Most Influential Woman of 2008 by Lifestyle MSN.

Whitney Thompson is a married woman. Her husband's name is Ian Forrester, a painter. Her partner proposed while sightseeing in Dublin, Ireland.
The couple tied their knot in a private ceremony conducted at The Great Hall of Ackergill Tower in Wick, Scotland on 14th November 2014.

Well, the couple has been married for about two years, but they don't have any children yet. Maybe be they will have a family after they have achieved their career goals. As for now, they are very happy with their married life.

The actual earning and net worth of the stunning model is not revealed in the media yet. But looking at the dresses, she wears and brands she has modeled for she probably has a huge net worth. Apart from that, she is also the winner of the America's Top Model from which earned $100,000 contract with Covergirl cosmetics.

The couple tied their knot in a private ceremony conducted at The Great Hall of Ackergill Tower in Wick, Scotland on 14th November 2014.Her husband Ian is a painter. He proposed while sightseeing in Dublin, Ireland.