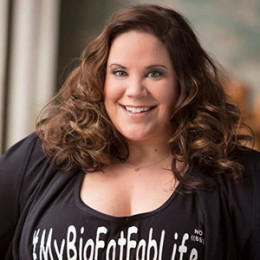 Whitney Way Thore is a television personality known for the television show My Big Fat Fabulous Life on the TLC network. She is known as an activist, dancer, and internet celebrity. She also released her own memoir called “I Do It The Lights On”.

Thore is currently dating a new boyfriend after breaking up with her former love. The former couple broke up in 2017 after she knew that he cheated her with multiple women.

Whitney Way Thore is a television personality known for the television show My Big Fat Fabulous Life on the TLC network. She is known as an activist, dancer, and internet celebrity. She has also released her own memoir called “I Do It The Lights On”.

She is the activist of "No Body Shaming" movement in which she contributes through her website and blog. She has been featured in the major media outlets including ABC News, NBC's Today Show, and The Huffington Post. She has not disclosed any information about her personal life and relationships.

Whitney was born on April 14, 1984, in Greensboro, New Carolina, United States. She is the daughter of Glenn Thore (father) and Barbara “Babs” Thore (mother). She grew up with her older brother Hunter Thore.

Thore was accepted in the Theatre Summer Enrichment Program at the Governor’s School of North Carolina of Meredith College in 2000. She completed her graduation from Page High School in 2002 and then went to Appalachian State University in Boone, North Carolina. She graduated from the University majoring in theater.

Following her graduation, she went to South Korea to teach English to schoolchildren. She became the on-air producer of Jared & Katie in the Morning on 107.5 KZL, a major radio station in Greensboro after returning to the U.S.

On February 27, 2014, Jared and Katie in the Morning created a dance video called “A Fat Girl Dancing” on 107.5 KZL’s YouTube channel. The video went viral, allowing Thore to promote her message of body acceptance and positive body image. As a result, she was featured on numerous media outlets such as ABC News, NBC’s Today Show, and The Huffington Post.

GOOD NEWS! The new season of #MyBigFatFabLife airs Tuesday, January 1 at 8/7c on TLC! We’ve been working on this season since April—and we can’t wait for you to see it! Tag the friends and fam you watch the show with! CHECK MY STORIES FOR THE SUPERTEASE! @gwthore @hunterthore @rtalfish @singkorswim @buddycpfom @isntsheheather @ashdanbay

She starred alongside her family in an American reality TV series, My Big Fat Fabulous Life in early 2015. The show led to her life and her mission to lose weight. The first season of the show aired on January 13, 2015. The show has successfully reached its fifth season, which aired on March 27, 2018.

The bus was parked in front of her home when the incident happened in February 2019. She stated in an exclusive clip,

"I went outside to get the mail and saw that somebody had f—ked up the side of the RV."

Whitney Thore’s net worth is $1.5 million at present. In her career, she has earned a decent amount of salary from her significant works.

She stands at the height of 5 feet 2 inches and weighs 170kg. She has dark brown hair and blue eyes and there are no details regarding her body measurements.

Whitney Thore is unmarried at present. She was in a relationship with her boyfriend Lennie Alehat.

The star of TLC’s “My Big Fat Fabulous Life” shocked her ex-boyfriend when she told him on the Jan 31st episode that she’s pregnant with his child especially because she suffers from PCOS, which can cause infertility.

Later, she dated Avi Lang from September 2016 to March 2017. Lang was already engaged to a woman named Nada Louis and dated a number of ladies when he was with Thore.

When she knew about his multiple relationships, she broke up with him and moved on. She, however, moved on in her life with a new boyfriend named Buddy aka 'buddycpfom'.

The guy frequently appears on her Instagram posts and the two are so much into each other.

Earlier this year on August, she posted a picture on her Instagram with a big message. The full caption was fully directed towards all the trolls who body shamed her. According to the post, a lot of people sent her a message regarding her weight loss journey.

The My Big Fat Fabulous Life star usually shares a lot of pictures while doing rigorous weight training and CrossFit but her followers were asking whether why is she not losing any weight?

In the long caption post, she said it is because of the eating habits that she is not able to lose weight. According to her,

"I used to struggle with disordered eating, both purging (but not traditional 'bingeing'; I used to purge regular meals), as well as restricting (eating as little as a few hundred calories a day for months at a time).

Well, she took all the trolls head on and stated her opinion on the matter.