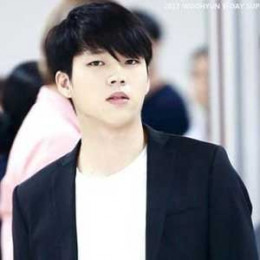 A South Korean singer, songwriter, actor plus composer, Woohyun debuted as the main lead singer for the band Infinite. He is famous among millions of fans, and his work is appreciated by the audiences as well as critics too. He has a great fan following of 1.6 million on Instagram. The cute man is single but is involved in various rumors about his affairs.

Born as Nam Woo Hyun on 8th February 1991 in Seoul, South Korea. He has an older brother named, Man Boo Hyun who is currently the owner of a popular BBQ Restaurant in Suyu, Seoul. Woohyun graduated in Applied Music from Dong-ah Institue of Media and Arts.

From the early age, he was interested in singing and auditioned at Woollim Entertainment to start his career. Later on, Woohyun was selected and kept under training phase along with other agency, YG Entertainment.

In 2010, he joined South Korea boy band, Infinite as the main vocal with the band members, Dongwoo, Sunggyu, Sungyeol, Hoya, Sungjong and L. He then joined South Korea television music competition program by Shin Dong-yup and became a permanent member of the show.

On 1st October 2011 he gave his first performance on air and after one month he announced that he was leaving the show for a short time because of Infinite's upcoming promotions. Moreover, Woohyun gave more additional appearances on the show, one solo and another with his group mate, Sunggyu.

Furthermore, Woohyun also started his career in musical theater. He appeared as a supporting role in the musical Gwanghwamun Sonata. In 2012, he debuted in the drama, The Thousandth Man with a minor role.

He was selected as a part of SS's Gayo Daejun with Dramatic Blue, the 2012 project team. In 2013 he released his debuted song, Cactus along with Lucia, South Korean Indie Singer.

He was also a cast in the KBS drama Hi! School: Love On as a lead role along with Kim Sea-ron and Lee Sung-Yeol. The talented Woohyun debuted in directing from a short horror movie, What Happened in Hong Kong.

In many of his interviews, Nam has said he used to have several girlfriends during college life.

Recently also there was a rumor in town about him dating a non-celeb girl named, Kim Yoo Kyung. When Woohyun travelled Disneyland with his friend Kim was also part of the group.

Well, he didn't address the rumors so it can be assumed that he might be single.

Woohyun is not open up about his net worth to the media. But looking at his successful career, he must have a huge worth. He also owns a Bentley Continental GT V8S.