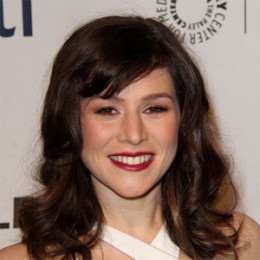 Australian actress and television personality, Yael Stone is known for her portrayal of "Lorna Morello" in an American comedy-drama web television series; "Orange Is the New Black."

Stone has worked extensively in Australian theatre and won the Best Supporting Actress Award and Best Newcomer Award at the 2008 Sydney Theatre Awards for her roles in Frankenstein and The Kid. Stone is in a relationship with the founder of Indigenous mentoring program AIME, Jack Manning Bancroft.

Yael Stone was born on 6th March 1985 to Harry Stone and Judy Stone in Sydney, Australia. She belongs to mixed ethnicity (Ashkenazi Jewish and English) and holds an Australian nationality.

Stone’s father Harry Stone is an architect and belongs to a Jewish family. His father was born to Holocaust survivors parents in Czechoslovakia. Her mother is a nurse who converted to Judaism.

Stone has two siblings; Elana Stone, a musician, and, Jake Stone, was the lead singer of the band Bluejuice. She joined the Newtown High School of the Performing Arts and the National Institute of Dramatic Art (NIDA).

Yael Stone has played iconic roles in the several movies as well as TV series. She began her acting since her childhood, as she participated in various drama’s through which she earned wide appreciation from the viewers and judges.

Stone debuted with the 2000 Australian comedy film, Me Myself I as a Stacy Dickson, starring Rachel Griffiths, David Roberts, and Sandy Winton. The following year, she also appeared in Miniseries, The Farm as Young Sam Cooper.

The actress appeared as Stacey in 2007 Australian film, West. The same year, she started working with Australian television medical drama, All Saints, alongside Judith McGrath, Georgie Parker, Jeremy Cumpston and many others.

Stone has been working as Lorna Morello in an American comedy-drama web television series, Orange Is the New Black since 2013 which has won her the prestigious award- Best Actress for Screen Actors Guild Award for Outstanding Performance by an Ensemble in a Comedy Series.

Yael Stone is one of the promising actresses of Hollywood, as per some sources, she has an estimated net worth of $1.5 million, but the exact amount as of 2018 is still under review.

According to a source, the cast of Orange is the New Black gets paid around $65,000 on average. So as per her role in the series, we can assume that she might get slightly more than the average salary.

The Orange Is the New Black actress, Yael Stone is in a relationship with AIME Mentoring founder Jack Manning Bancroft.  In November 2017, the couple announced they were expecting their first child.

Stone married to Australian actor, Dan Spielman in 2012, and lived in New York City. The couple split after two years of marriage in 2014, however, Stone only announced it in July 2017. The power couple is due in the mid-2018.

The Orange is The New Black star, Yael Stone's interview,

Stone married to Australian actor, Dan Spielman in 2012, and lived in New York City. The couple split after two years of marriage in 2014, however, Stone only announced it in July 2017.