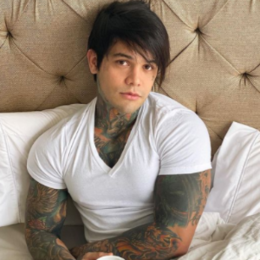 Yeferson Cosio, aka YEF, is a Colombian musician, content creator, and model. He is known for his social media as well as for his hit song "Esa Mujer." Besides, he won the hearts of thousands for sharing a variety of his modeling photos and content via Instagram for his over 2.1 million followers.

Yeferson Cossio is not single. He is in a romantic live-in together relationship with a lady named Jenn Muriel. Muriel is famous on social media platforms like TikTok, Instagram, and YouTube as well. In fact, Cossio's Instagram is showered with pictures of his girlfriend. 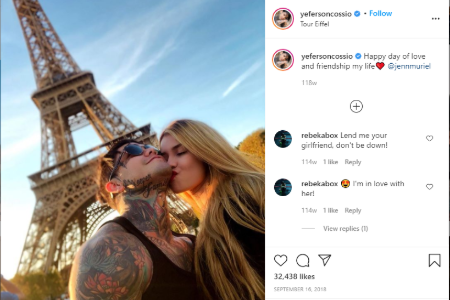 Cossio gave a hint he has been dating Muriel for eight years when he uploaded the first picture posing next to Jennifer (Jenn) Murrell wishing her "Happy Birthday" on 20 November 2018. Except for Jenn, the 26-year-old was never seen or romantically linked to any women.

Prior to that, Cossio had shared a photo of him with Muriel and Cintia Cossio on February 18, 2017. He captioned the picture, writing, 'The most beautiful thing that life has to give me and could give me are you.' Beyond Jennifer, women Yeferson is close to is his mom and his sister Cyntia.

Yeferson Cossio has an estimated net worth of $2 million as of 2020. The Colombian-born musician makes millions from his career as a musician. Not only that, Yeferson pockets big chunks from ads, endorsements, and sponsorships as well. He moreover has amassed over 2.6 million followers on Instagram. 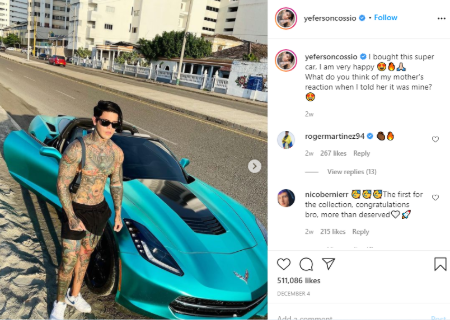 Speaking of YouTube career, Cosio uploaded his first YouTube video on 12 December 2012. From then till today, he has summoned around 382k subscribers and 18,237 990 views on YouTube. Cossio is fond of luxury and sports cars and updated he bought a new car on December 4, 2020.  The Chevrolet Corvette C8 Rapid Blue car costs CAD$175.74 approximately. The Cossio family, along with Jenn, resides in Cartagena, Colombia.

Yeferson Cossio started his modeling career in 2013 when he was discovered by the modeling agencies Stock Models, Informa Models, and Athenea Models. Later on, he was involved in sharing additional modeling photos on his Instagram news feed from November 2014.

Cossio is an ambassador for the Bodytech brand and attends multiple tattoo conventions, including the Hall of the World in Quito Equador and the Cali Tattoo Expo.

B sure to check out Marriedwiki.com for more biographies.