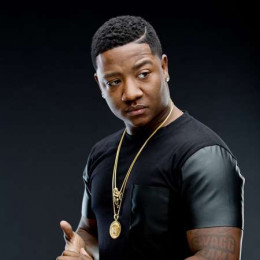 An American rapper whose real name is Jasiel Robinson. His father Stanley Tucker was the owner of hair care product. In 2005 he released his hit song "It's Goin Down" after meeting with Atlanta producer Nitti Beatz. He has also released other popular songs like "Coffee Shop" and "Bottle Poppin.". He has also sang in collaboration with popular singers like T-Pain. He has his own record label named Swagg Team Entertainment. In 2006 his song It's Goin' Down was awarded with Hip-Hop Track of the Year. He was also listed in Richest Rappers List made by Forbes.

Talking about his relationship history, he was once married to his high-school sweetheart. Later due to his extra marital affairs, she divorced him. Together they were parents of three children. According to the sources , he is the father of eight children and he had affairs with four women whose identity has not been disclosed. Currently he seems to be single because there is no news of him dating anyone in internet.

She is his first wife. Together they have three children. It is said that his extra marital affair was the reason behind their divorce.

She is the eldest child form his ex-wife. She is now in her teen age.

He resembles more like his father. He was born safe and sound.

She was born from one of his affairs. Her mother's name has not been disclosed.

She has one twin fraternal brother. Her mother has not been disclosed yet.

He is gorgeous boy. His mother's name has not been disclosed.

She is very gorgeous. She has one twin brother.

He is the youngest child. He is the twin brother of Eden. Both the twins were born safe and sound.