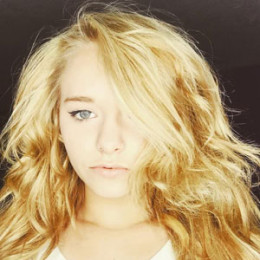 American musical.ly star, Zoe Laverne rose to fame in 2016 after posting many lip-sync videos on her musical.ly account. Laverne is unmarried, but she is in a relationship with Instagrammer, Cody Orlove from 2017.

Zoe LaVerne was born on 3rd June 2001 in Indiana under the birth sign Gemini. She is American as per nationality and ethnicity wise she's White. She has two brothers, Eric and Cameron (half-brother).

Zoe LaVerne started to earn fan following on her social media in 2016. LaVerne posted several lip-sync videos on her musical.ly account. She also answered the questions of her fans via musical.ly.

As of February 2018, LaVerne earned over 1.24m fans and 253.3m hearts on her musical.ly account. In March 2017, she was awarded coveted musical.ly verification crown. Once, she and Terin Sottile took over each other’s account on the musical.ly for a day.

Along with musical.ly, she also has numbers of fan following on her social media including Instagram and Facebook.

Zoe LaVerne is currently in a relationship with an Instagrammer, Cody Orlove. They started dating on 13th November 2017. The couple also announced that they completed their third month with each other by posting a picture on their Instagram,

''thank you for reminding me what butterflies feel like happy 3 months (I’m late by a day) I love you,'' by Laverne.

''It’s only been three months since we started dating, but just know you’re mine forever,'' by Orlove.

Prior to this, LaVerne dated fellow muser, Zephan Clark. But they broke for some unknown reasons.

Zoe LaVerne from her career as a musical.ly star as earned an estimated net worth around $0.6 million, but the exact amount is not public.

Here is compilation of Zoe LaVerne's musical.ly posts of 2018,