Home Article 'My Cat From Hell' Actor Jackson Galaxy Married Relationship With Wife Minoo Rahbar; His Past Affairs At Glance

'My Cat From Hell' Actor Jackson Galaxy Married Relationship With Wife Minoo Rahbar; His Past Affairs At Glance 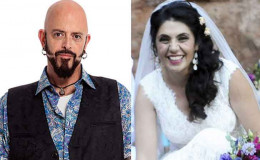 An average person dreams about becoming a celebrity and seeing all the fame, a normal person is usually blinded to see all the hardships and pressures that are behind the scene of the stardom.

There might be no celebrity in existence that did not go through the painstaking rumors and controversy. Among the ones who had to face such baseless rumors is Jackson Galaxy who was rumored to be a homosexual because of his few choices.

Is he really? Let's find out!

Jackson Galaxy and his wife, Minoo Rahbar got married at the Best Friends Animal Society’s no-kill pet sanctuary in Utah on 29 June 2014.

Considering how his wife is also an animal rescuer, the famed cat behavioral expert couldn’t have picked a better place to tie the knot in holy matrimony.

The ceremony was really an intimate affair, with a handful of family and friends in the attendance and Mooshka, the pair’s dog was the designated ring bearer of the animal-loving duo.

Jackson met Minoo when the latter was trying to raise money for her cat rescue center. Although married for four years, the duo does not have any children or a child.

Speculations are that she is still taking her time and enjoying her celebrity moment because motherhood comes with a lot of responsibility.

Nevertheless, we trust and respect her moves but the pair's fans are still eagerly waiting to hear of her pregnancy announcement to see the lovebirds as parents. The rest is history from there and the couple has been living together in Los Angeles with six cats and their dog.

Galaxy celebrated the new year with his loved ones. He wished 'HappyNew Year' from the #TeamCatMojo to all his friends, families and lovely fans via Instagram post.

Jackson Galaxy Past Affairs and Rumors

As far as we know there is no record of Jackson's past relationships but there have been rumors of him being a gay. There’s a stigma attached to men who love cats, they are assumed to be feminine and often misread as gay.

Since Jackson is an avid cat lover and isn't afraid to show his love publicly, the stereotype had begun.

Don't miss: Is Rachel Reenstra Dating someone? Know about her Affairs and Relationships

Although the majority of his audience and viewers are women, the stereotypic belief that men should own dogs has never bothered him.

He jokingly refers to himself as strictly bi-pet-sual owing to the fact that he loves both dogs and cats and constantly posts on his Instagram showing his love. He recently posted a pic with a basket full of kittens.

A tisket a tasket, kittens in a basket Had a blast visiting @felinerescue in the #TwinCities and speaking at their Glitter Ball celebrating 21 years of saving cats! Here’s to 21 more!!! #AdoptDontShop #TNR #SpayNeuter

There is also speculation that the rumors about him being a gay rose because he also supports LGBTQ rights and frequently urges people to show their support for unconditional love.

Its rather depressing to see that just because a guy loves cats and is an avid supporter of LGBTQ rights, he is deemed to be a Homosexual.

Nonetheless, he has shattered all the rumors through his marriage and he has shown that you don't have to be gay to show empathy and support equal rights.

It is a responsibility of every human to show love to animals and endorse equal rights for all, regardless of sex, gender, religion or anything else for that matter.