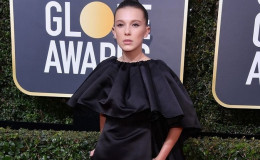 Millie Bobby Brown, at such a young age, has established herself as a professional actress which she has already proved with her outstanding acting skills as a role of a young girl with psychokinetic abilities.

And now, this Stranger Things actress has palled up with big stars including Drake and Ariana Grande, also bagging a big role in the upcoming legendary film deal, Enola Holmes Mysteries.

Millie Brown stunned everyone with her chic and astounding Golden Globes look in such a way that even the fashion and singing diva Ariana Grande couldn't help complimenting her!

Millie posted a snapshot of text messages from Ariana, where Ariana was so blown away by Millie's black dress that she responded with single compliment words like "Proud", "Stunning", "Gorgeous", "Bye". 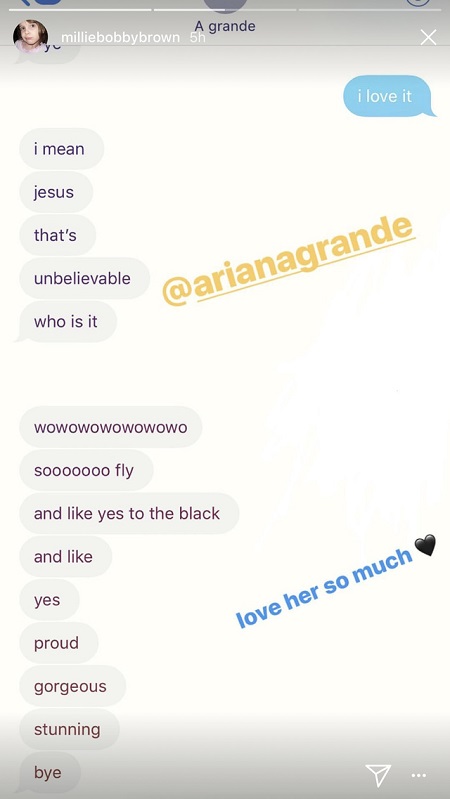 Millie Bobby shares the snapshot of her Instagram's DM with Ariana
Source: Instagram

Millie sent some snaps of her look at the Sunday's Golden Globes 2018 to get some insight on how it looked and without a doubt, her look was bang on! Ariana immediately responded with great admiration of how good Millie was looking.

Not only this, Millie was also seen hanging out with rapper Drake during the Sunday's Golden Globes that made her look really cool. The Emmy-nominated actress Millie has even made a deal with Legendary Entertainments who're ready to cast Millie in a grand feature film series based on Nancy Springer's Enola Holmes Mysteries novel series.

Brown will not only act but also produce the movie with her PCMA Production banner.Millie has indeed a long way to go and all her fans are waiting to see the budding actress star in A-list movies.