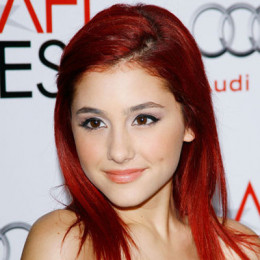 Ariana Grande is an American actress, dancer, and singer who gained popularity when she played the role of Cat Valentine on the Nickelodeon TV series named Victorious. She is the first artist to hold top 3 on Billboard chart since the Beatless.

Ariana Grande was born on 26 June 1993 in Boca Raton, Florida to the family of Joan Grande and Edward Butera. Her father was a graphic design firm owner and her mother worked as the chief executive officer of Hose-McCann Communications. Her birth sign is Leo and she belongs to Italian descent.

She has a brother named Frankie J. Grande, an American singer, producer, dancer, and also an actor. Frankie Grande is openly gay.

As a child, she had a close connection with her maternal grandmother Marjorie Grande. Her mother was pregnant with her when she shifted to Florida from New York. Her parents separated when she was around 8 or 9 years of age.

She studied at Pine Crest School and North Broward Preparatory School. She was just 13 when she gained interest in professional music.

Grande, 24, started her career performing with the Fort Lauderdale Children's Theater in Annie. In addition, she presented her talent in Beauty and the Beast and The Wizard of Oz.

She portrayed the role of a cheerleader Charlotte in the musical 13 on Broadway. She received the National Youth Theatre Association Award from the very role.

She received a breakthrough role in the Nickelodeon TV show Victorious with 13 co-star Elizabeth Gillies. After the first season of Victorious, she remained focused on her music career.

You May like;Ariana Grande' Crush Jim Carrey Just called her 'A Breath of Fresh Air'

Her second single, Break Free peaked at No. 1 on the Hot Dance/ Electronic Songs and No. 4 on the Billboard Hot 100. The song featured German musician and producer Zedd.

Grande came up with her third studio album Moonlight in 2015. In 2016, she released her lead single "Dangerous Woman" that peaked at No. 10 on the Billboard Hot 100.

She released her lead single "No Tears Left to Cry" on 20 April 2018 that debuted at No.3 on the Billboard Hot 100. It is the lead single from her upcoming fourth album Sweetener.

Following the released of her first single The Way, Billboard magazine ranked Grande at No. 4 on the list of "Music's Hottest Minors 2013".

Grande won the Favorite Breakout Artist award at the People's Choice Awards in 2014. She performed "Break Free" on the MTV Video Music Awards in 2014 and won 'Best Pop Video for " Problem".

She is the first singer in the Billboard history to have the lead single debut in top 10 from each of her three albums. Seth MacFarlane and Grande became the brand ambassador of Reebok.

She has received four nominations for Grammy Awards. Furthermore, she has won three MTV Europe Music Awards and three American Music Awards. She grabbed 10 Teen Choice Awards and 2 out of 12 IHeartRadio Music Awards.

Grande has an estimated net worth of about $45 million at present. Besides her music career, her perfumes grossed $150 million in 2017 alone. She became the Reebok global ambassador in September 2017.

Previously, Grande and her fiance Davidson owes a new NYC apartment that includes an IMAX theatre and 75-foot indoor pool. The couple moved into their $21.7 million new apartments in Manhattan featuring a private spa, steam pool, sauna, and plunge pool.

Apart from that, she has a property in Los Angeles, New York, and Miami.

Like her elder brother, Frankie Grande is gay, some of her songs including "Break Your Heart Right Back" supported the LGBT rights. While starring the musical 13 in 2008, she met actor Graham Philips. The couple dated for some years until they broke up in 2011.

Back in 2013, the news created headlines in the media when she stated that Justin Bieber forced her to post kissing pictures on Twitter.

After recording "The Way" together in 2012, Grande and Mac Miller became close friends. The pair started dating in 2016. After being an item for some years, Ariana announced her split with her rapper boyfriend via an Instagram story on May 2018. Miller found dead in his home in Los Angeles at the age of 26.

It was the same year and the same month she began a romantic relationship with comedian Pete Davidson. Davidson confirmed their engagement in June 2018 on The Tonight Show with Jimmy Fallon. Grande showed off her $A 125,000, 3-carat pear-shaped diamond ring. However, the couple failed to handle their love life and called off their engagement on October 20, 2018.

Later, Grande stated, she is still recovering from the split with Pete and her ex-boyfriend, Mac Death.