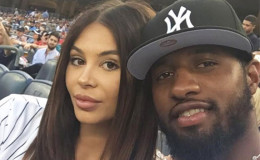 No one is perfect and everyone makes mistakes and it's inevitable but the right thing to do after the mistake is to own up to it and make it right be it in a relationship or in everyday life.

It seems like the American Basketballer Paul George is trying to do right by his mistakes and is repenting for his bad decisions and poor choices that he made in his relationship with his girlfriend.

In the summer of 2013, George first met Daniela Rajic at the Tootsie Club. Soon their relationship started and just like that, ended in a short span of a few months.

Many thought it was just a fling of the basketball star as the end seemed quick and easy but their relationship later took a different turn than expected.

After some time, it was revealed that Rajic became pregnant after their encounter and as the exposures were just getting started, she further publicized the news with claims that George bribed her by offering a whopping $1 million to abort the baby. She claimed that she denied the offer and was offended by it.

Happy bday woobie you know what you mean to me and how much I love you! Your young ass finally caught up lol.. I’m excited to see what’s in store for you thru year 28. Happy to call you my baby! Happy bday love @danielarajic

Later on, although George was resistant to accept it initially, he finally admitted to his affair with Daniela but denied the accusation of trying to pay off to abort the child.

Click to know more; What is the Current Relationship Status Of the Internet personality, Jack Dail? Is he Dating?

He refrained from accepting that it was his child and opted to undergo certain tests to confirm that he was not the biological father of the baby.

After the birth in 2014, the tests results led to confirm that Paul was the father which caught him by surprise and to make things even complex. As a result, Rajic slapped George with a paternity case asking for the full custody of his daughter Olivia George. But both parties came to an agreement to co-parent, keeping their differences aside for the best of Olivia.

Also Read: Who is Myles Garrett's Girlfriend? Is he Dating someone? Find out here

Many people had thought that the couple were no longer in love and would go on to meet new people in the future, but they somehow mended their relationship fast-forward three years.

They grew closer together and now have become a strongly bonded couple. Paul even posts about Daniela and his daughters in his Instagram and seeing it seems like they are in love.

Happy bday woobie you know what you mean to me and how much I love you! Your young ass finally caught up lol.. I’m excited to see what’s in store for you thru year 28. Happy to call you my baby! Happy bday love @danielarajic

The couple even had their second child on February 9, 2018, and they named her Natasha George.

They aren't perfect and have faced issues but it looks like they are set to make their future better than the past.

The world and the fans were shocked when George reunited with Daniela and many were skeptical if they would last together considering their messy past but now Paul is living a happy life without controversies with Daniela and his two adorable daughters in Palmdale, California. Moreover, new reports are suggesting they are expecting a third child.

Paul George Past Affairs and Rumors

Paul George had a controversial love life since his break up with Daniela in 2013 as he was already in relation with Doc River's daughter Callie Rivers after it.

But the relationship was not meant to be as only after few months of relationship with Callie, the news of pregnancy of Rajic came to light and they broke up.

Later, Jessica Burciaga, a Playboy model, and actress became Paul's next girlfriend in late 2013 but the reports were pure allegations and there was no evidence of their relationship except for the picture posted by Paul with her.

Must Read: Actress Sanaa Lathan hiding her secret Boyfriend; Find out about her Affairs

In 2016, he got together with Destiny Marie and he also uploaded a picture of Destiny calling his  “Woman Crush Wednesday” giving hashtag “#WCW” but was later on deleted.

The removal of the post made things more interesting as it raised many questions, albeit, it won't matter as he is in a relationship with Rajic.

Other than his relationships, he was also rumored to be in an extramarital affair with Roy Hibbert's wife but there is no proof backing up this claim.

Regardless of his past, Paul George is now content with his life with his girlfriend and daughters and we are happy to see that the star has decided to settle down.