Home Article Actor Denzel Washington and wife Pauletta Washington have been married since 1983. Know about their family and children

Actor Denzel Washington and wife Pauletta Washington have been married since 1983. Know about their family and children 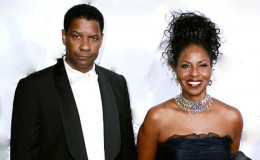 Denzel Hayes Washington Jr. (born December 28, 1954)[1] is an American actor, director, and producer. He has received three Golden Globe awards, a Tony Award,[2] and two Academy Awards: Best Supporting Actor for the historical war drama film Glory (1989) and Best Actor for his role as a corrupt cop in the crime thriller Training Day (2001).[3]

Working and getting popular in American Film industry is not as easy as it sounds. Similarly, another toughest thing in this Tinseltown is having a long-term relationship.

Hollywood is the place which is also popular for its short marriages and relationships. However, the talented actor Denzel Washington has luckily managed to make the impossible possible!

Denzel Washington has been married to his all time loving wife Pauletta Washington since 1983 and is still living together looking happier than ever. Let's reveal the secret behind the happily married life of this amazing couple.

Married Life of Denzel and Pauletta

Two times Academy Award winner, three times Golden Globe Awards winner, and Oscar-nominated actor, Denzel, together with his wife Pauletta have set the best example of a perfect couple in the industry.

The duo officially tied the knot in the year 1983 and have celebrated 33 years of married life together and in this time being, their love and commitment towards each other are still the same or we can say have grown much to a higher level.

Love is still in the air for the couple

The Glory actor and his wife Pauletta, 62, are still in love with each other.

On Oprah Winfrey talk show, Denzel talked about his long-lasting marriage and said:

'People who say they knew (if their spouse was the one) right away are lying! It's a marathon, not a sprint.

He further explained that though he has to stay away from his wife and kids, this never created any problem or differences among them. He added:

'Hollywood gets a bad rap; it's just a place with some footprints in cement. I don't live there, I live in Los Angeles. But it's probably helped our marriage that we're apart a lot.'

Pauletta and Denzel Washington first met while working together on a film 'Wilma' in 1977. Pauletta is an American actress who has starred in the 80s films like Purlie, Beloved, Happily Ever After: Fairly Tales for Every Child (1995) and The Parkers(2003-2004).

The duo fell in love with each other instantly and after six years of committed relationship, they decided to get married and be each other forever.

A Couple of years ago, Denzel was accused of having an alleged affair with one of his co-actor, Sanaa Latham.

The rumors spread in the media like crazy during the summer of 2003, where there were reports that the actor was having an affair with his 'Out of Time' co-star Sanaa.

However, the 2 Guns, actor, denied the accusation and defended his marriage. HollywoodLife.com reported him saying:

"I don't know if it's show business that has a monopoly on divorce, it's just that you hear about it," he wrote. "I just think that you have to work at it. Not give up on each other. It's a commitment. It's not all the honeymoon, it doesn't last forever, so you work at it. And hopefully you're good friends first, that might help!"

Here's a video of Pauletta talking about her family and husband Denzel and her amazing journey of marriage.

The adorable couple has four children together and all of them has grown to be a well-educated and smart young man and woman.

Their eldest son is John David (born on. July 28, 1984), a former football player with the United Football League's Sacramento Mountain Lions (and before that, college football at Morehouse).

Malcolm graduated with a degree in Film Studies from the University of Pennsylvania and Olivia starred in a movie 'The Butler'.

Well, the inspiring love story of Denzel and his wife has won the hearts of millions of their fans and we really wish that the couple continues their relationship together for better or for worse and cherish their love and live happily with a perfect family.