Actress Emilie de Ravin Split with her long time husband Josh Janowicz in 2014. Now She is engaged to Boyfriend Eric Bilitch on July 2016. 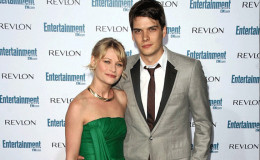 Emilie de Ravin is famous and gorgeous Australian actress who has played as Tess Harding on Roswell and Claire Littleton on the ABC drama 'Lost'. She also shook the charts on Maxim's Hot 100 list three times in 2005, on No. 47, the next year on No. 65, and in 2008 on No. 68. Aussie actress. She currently has a role in the network's fairy tale drama Once Upon A time.

Famous and gorgeous Australian actress Emilie de Ravin is undoubtedly one of the best actresses that we have today. She has managed to win the heart of millions through her gorgeous look and amazing talent. She is currently living a happy and blissful married life with her director husband Eric Bilitch.

The "Lost" actress finally got engaged with her writer/director boyfriend Eric Bilitch on July 6 of 2016. The couple has been dating since 2014 and now is engaged happily with 8 months old baby girl.

Before getting married, they welcomed a baby girl on March 12, 2016. Few days after that she posted this news on her Twitter and shared with everyone that they had a girl and her name was Vera Audrey de Ravin-Blitch.

Hello world! Thank you for a wonderful first month. Everything is amazing here! Love, Vera

When she got engaged, she also posted a picture of the big shiny piece of rock on her ring finger and shared the news on her Instagram account quoting that she was very excited; probably for marriage.

So excited!!! I love you @ericbilitch ??

In the image below, their little girl is about eight months old and looks really adorable.

Vera Audrey. Happy 6 months to this magical little person. You're the love of our life. -Mum and Dad

Park time with my love?? @ericbilitch

de Ravin announced via social media that she's pregnant with the couple's second child, a son on 29th June 2018.

Coming this fall...Baby boy makes 4! Eric & I could not be more excited to share our happy news with y’all & Vera is over the moon about becoming a big sister! @ericbilitch #ClearblueConfirmed #ClearbluePartner

"Eric & I could not be more excited to share our happy news with y'all & Vera is over the moon about becoming a big sister!"

They welcomed Theodore Kubrick de Ravin-Bilitch at home on 9th December. The blessed mother shared her happiness with her fans via Instagram post.

Theodore Kubrick de Ravin-Bilitch was born at home on December 9th. Welcome to the world beautiful boy! We’re so excited you’re finally out here to play with us! We love you so so much Theo xoxoxo.

The family of four have every reason to celebrate their togetherness.

Let's congratulate the pair for their extended family!

Emilie de Ravin's Divorce With Her First Husband Josh Janowicz: An End To A Fairy-tale Marriage

Emilie's life seems to be perfect with a happy family; having a loving husband and adorable daughter, but it was not perfect for her before.

Emilie was previously married to actor/director Josh Janowicz who is known for 'Charlie's Angels: Full Throttle' (2003), 'December Ends' (2006) and 'The Chumscrubber' (2005).

Also See: Is Lana Parrilla married or dating anyone?

Emilie and Josh, who are both 32, dated for three years before Joshua proposed on New Year's Day in 2005 in Emilie's hometown Melbourne.

The pair chose the Australian city for their wedding when they tied the knot in June the following year.

The couple read their vows on 19th June 2003 but later organized an official public wedding ceremony on June 26, 2006.

Discover: Who is Robert Carlyle dating?

However, shockingly, six months after their marriage, Emilie began divorce proceedings. However, her divorce petition laid dormant for two years until Joshua was finally served with divorce papers in 2009

The couple decided to withdraw the divorce case and reconcile the differences. However, in 2014, they finally got divorced after Joshua Janowicz filed for divorce citing irreconcilable differences and ended their 8-year long marriage.

The couple had no children together.

Like de Ravin, Bilitch is also the part of the entertainment business. According to his Twitter bio account, he is a director as well as a writer.

Emilie and Eric first announced their relationship to the public last summer and the 'Once Upon a Time' actress and the filmmaker were spotted walking hand in hand in Paris at that time.