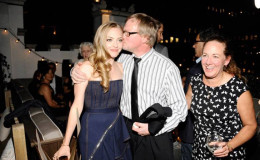 Amanda Seyfried is a well known American actress. She is currently engaged with Thomas Sadoski and expecting her first child with him.

She is currently living the life of her dream as she has just got engaged to her boyfriend Thomas Sadoski. The couple was dating for a quite long time. Let us discuss them in detail.

Being a famous celebrity as Amanda you are bound to have numerous affairs or boyfriend. Amanda who is also known for her German looks and her beautiful eyes has always managed to be in a headline regarding her relationships.

Amanda was first reported dating Micah Alberti, an American actor. The couple was in a relationship from 2002. They were in good terms with each other for four years until their split up in 2006.

Amanda was trying to find the perfect one for her and in that regard, she dated Jesse Marchant, a Canadian singer at the same time she was dating Micah.

Amanda then dated English actor Dominic Cooper from 2007 to 2010. But in between, she was spotted dating Swedish Actor Alexander Skarsgard in 2008.

Then she dated American actor Ryan Phillipe from October 2010 to May 2011. Apparently, the reason for the split up was the couple has no time for each other because of their busy schedule.

In 2012 she was rumored to be hooking up with her co-star in Lovelace James Franco. James was reportedly spotted leaving Amanda's house.

After the rumor of Amanda and James in 2012, she also dated American actor Josh Hartnett from January to June 2012.

However, in 2013, Amanda was in a serious relationship with American actor Justin Long. The couple dated from 2013 to 2015.

The two met each other through a mutual friend in 2013. Amanda said that she was the one that messaged Justin first. She said that she

She said that she saw a post by Justin Long in which he wrote some weird and funny caption and from that post she was highly attracted to Justin.

Unfortunately, their relation did not last long and they broke up.

In 2016, Amanda announced that she has been engaged with Thomas Sadoski, her co-star in The Last Word.

In November 2016, Amanda and her boyfriend announced that they are expecting their first child together. A source close to the couple said, “Tommy and Amanda recently got engaged and shared the happy news with family and close friends.”

We wish for the couple's happiness and success for their future.