Home Article American Actor Corey Feldman Married Thrice, Is In a Relationship with Wife Courtney Since 2016; What About Their Son? Once Claimed To Have Been Stabbed

American Actor Corey Feldman Married Thrice, Is In a Relationship with Wife Courtney Since 2016; What About Their Son? Once Claimed To Have Been Stabbed

The 'Goonies' star Corey Feldman who claimed being stabbed by unknown people with a sharp object at a red light back in March 2018 is definitely all right now. He speculated that the incident was all related to a long-standing pedophile ring that includes powerful Hollywood men.

The 'Goonies' star Corey Feldman who claimed being stabbed by unknown people with a sharp object at a red light back in March 2018 is definitely all right now. He speculated that the incident was all related to a long-standing pedophile ring that includes powerful Hollywood men.

Back in 2017, he publicly accused two men who abused him when he was a child actor. Despite all kinds of ups and downs in his life, he's living a blessed life with his third wife Courtney Mitchell. Let's go for details about the incident!

Corey Feldman and his wife Courtney Anne Mitchell are enjoying every single day of their happy married life.

Prior to their wedding, the pair joined bachelor and bachelorette parties at the Chateau Nightclub in Las Vegas. 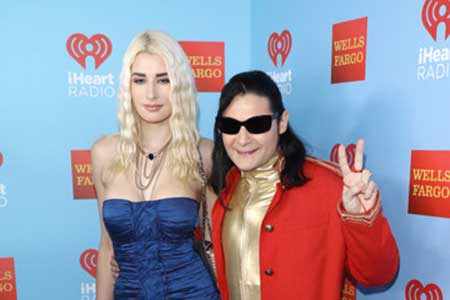 Feldman proposed his fiancee in the middle of November 2016 as they celebrated 4 years of togetherness in Palm Springs.

Mitchell, the DJ and keyboard player in Feldman's band 'Corey Feldman & the Angels', and the handsome heartthrob tied the knot on 22 November 2016. The nuptials was officiated by producer Marklen Kennedy at Elton John's Fizz champagne lounge at Caesars Palace, Las Vegas.

Talking with Too Fab after the ceremony, the star stated that he was 'very excited and a happy man.'

The couple has been living together as a married couple for more than a year and we are sure that everything is perfect between the two.

Corey Feldman's Past Affairs And Relationships

The Goonies star married his first wife actress Vanessa Marcil in 1989. The couple managed to be together until 1993.

He remained single for some years until he met actress and model Susie Sprague in a nightclub in January 2002. They dated and took months to know each other. 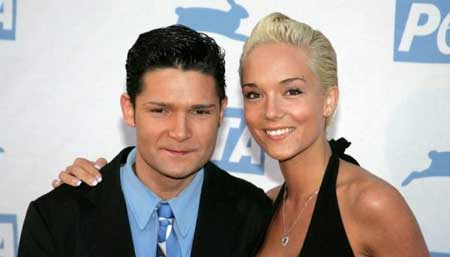 The two married on 30th October 2002 on the final episode of the first season of The Surreal Life. The ceremony was officiated by a rabbi by M.C. Hammer. The couple welcomed their only son, Zen Scott Feldman, 13.

She also sought for spousal support. Despite all, Feldman sought joint custody of their son. After five years-long process, their divorce became final in 2014. 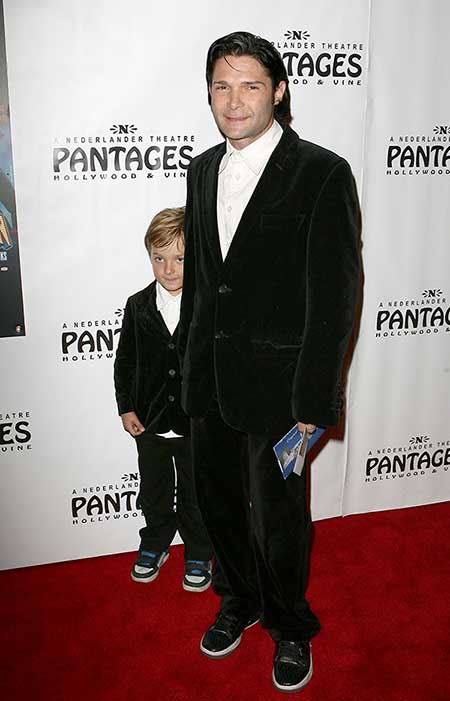 He explained that his son is the one who motivated him to stay away from alcohol and drugs for years.

"That’s where my love is and where my heart is. There’s no time to mope around or to be depressed because I have to be a positive influence on him. That’s what’s most important. I look at his beautiful smiling face and I say, ‘I’ve got to stay strong for him. No matter how mean and awful people can be, I can’t let that affect me."

As per the court document the star has to pay $750 every month as child support. He received the couple's 2001 Mercedes while his ex-wife received their 2002 Hyundai.

Corey Feldman, 46, claimed that he was stabbed multiple times in March 2018 by an unknown assailant. Above all, the curious case has taken an interesting turn.

The former child actor stated that he went to the hospital after being attacked that evening. He tweeted images of himself lying in the hospital bed and claimed that he was attacked by a "wolfpack". The star is now in stable condition, however, the police spokesperson said there's no laceration in his abdomen or any other body parts.

Here's Corey Feldman explaining the incident in his own words:

"IM IN THE HOSPITAL! I WAS ATTACKED 2NITE! A MAN OPENED MY CAR DOOR & STABBED ME W SOMETHING! PLEASE SAY PRAYERS 4 US! ???????? THANK GOD IT WAS ONLY MYSELF & MY SECURITY IN THE CAR WHEN 3 MEN APPROACHED! WHILE SECURITY WAS DISTRACTED, W A GUY A CAR PULLED UP & ATTACKED! I’M OK!"

He posted an Instagram image of the 'world's smallest knife wound'.

THE WORLDS SMALLEST KNIFE WOUND.....OR?!?! YES I WAS ATTACKED 2 DAYS AGO, YES THEY USED SOME SORT OF SHARP WEAPON, AND YES IT WENT INTO MY BODY! THIS IS WHAT THE SCAR LOOKS LIKE NOW, OBVIOUSLY IF IT WAS A KNIFE I GOT VERY LUCKY & IM BLESSED! IF IT WAS A SYRINGE, I WILL PRAY 4 THE BEST RESULTS! GOD BLESS!! ????????#Kids2 #COREYSTRUTHISCOMING #PRESERVEINNOCENCE

The child star also revealed that "there's a long-standing pedophile ring involving powerful Hollywood men". He said that he and his friend Corey Haim were molested by Hollywood stars when they were young actors.

When Harvey Weinstein's sexual allegation first came to the light, Feldman declared that he was going to announce the names. He received a lot of criticism after he said that he had to raise $10 million to finance his movie related to child abuse.

During his appearance on The Today Show, he named child agent Marty Weiss as one of his abusers while the other; former personal assistant Cloyd Jon Grissom while appearing on Dr.Oz.

Feldman was still unsure whether the attack was related to the pedophilia claims made about eight months earlier or it has some other story.

Well, some reliable sources say the investigation on the very incident is still ongoing. As per his recent Instagram post, the police is closer to finding the people.

WELL WELL ONLY TIME CAN TELL.....THE #TRUTH IS BEING REVEALED ONCE AGAIN! THANK GOD THE @LAPD R DOIN THEIR JOBS, & THANK U 2 THE SLEUTH REPORTING BY @theblastlife 4 GETTING THE STORY OUT! NOW LETS GO GET OURSELVES SOME BAD GUYS! THANK U 2 #FELDFAM 4 THE CONTINUED LOVE, SUPPORT, & PRAYERS! ??????#Kids2 #PRESERVEINNOCENCE #GODISGOOD #LOVENLITE #ISTANDWITHCOREY

Let's hope for the best in the following days! 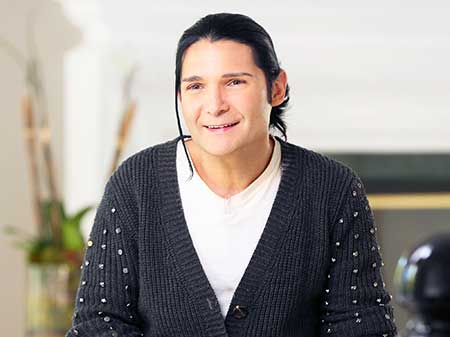