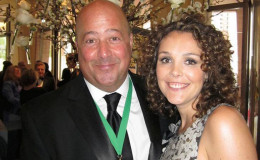 From jellyfish to ants to even poisonous SNAKES!!, this man will eat everything and not even hesitate. The legendary and fearless man is none other than the world-famous chef Andrew Zimmern. Though his choice for foods is usually bizarre and nasty, his choice for a woman is undoubtedly fabulous.

This three times James Beard Award-winning TV personality, chef, writer, and restaurateur is married to his gorgeous wife Rishia Haas and has more than fourteen years of successful married life. Sounds interesting, doesn't it? Let's stop beating around the bush and find every fact about this lovely couple.

Married life of Andrew and his wife Rishia

The power-house couple tied the knot in the year 2002. Before getting engaged, the duo started dating in 2001 and after having an affair for almost a year, Andrew finally proposed and they got engaged.

They organized a big, fat wedding on 26th December 2001 but it was a private event and only close friends and families were invited. The glorious ceremony was held at St. Paul Roseanne Nathanson in Minneapolis.

Since then, their life has been flooded with happiness and contentment through their blissful marriage without any rumors of divorce or extra-marital affairs.

Hence, their love life serves as a big inspiration for many, especially for the Hollywood couples where relationships do not last that long.

Andrew and Rishia have been blessed with a child, a son named Noah who was born after 3 years of their marriage on 2005. The family of three is living happily in their grand house in Minnesota.

Worlds youngest farmer giving me the run around on the Upper Peninsula ...

Andrew Zimmern (andrewzimmern.com) is universally regarded as one of the most versatile and knowledgeable personalities in the food world.

As the creator, executive producer and the host of the Bizarre Foods franchise on Travel Channel, Andrew has explored cultures in more than 150 countries, promoting impactful ways to think, create and live with food.

In 2012, he launched Andrew Zimmern’s Canteen, reflecting his fascination with food history from around the world.

With a location at Target Field, home of the Minnesota Twins, and the Kansas City Royals’ Kauffman Stadium, the company will expand into Minneapolis’ new Viking Stadium and several other locations in 2016.

Here is a video of Andrew's Bizarre Food show in France.

Inspired by visits to street stalls and markets around the world, Andrew Zimmern’s Canteen reflects the intersection of food and travel.