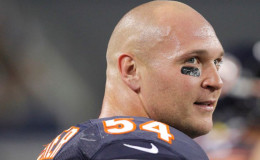 Brian Urlacher is a former American football linebacker who spent his entire 13-year career playing for the Chicago Bears of the National Football League (NFL). Urlacher played college football for The University of New Mexico, where he was renowned as a consensus All-American and also became one of the school's most decorated athletes.

While on the field, wearing the orange and blue has many perks, these so-called rallies also allow an athlete to enjoy the fruits of his labor off the field, especially when it is about your popularity with the ladies.

Speaking of which, Brian Urlacher's girlfriend history gives a picture that most fans can only dream about. So, who are the ones that have been either confirmed or rumored to be in a relationship with this tall Washington's hunk? 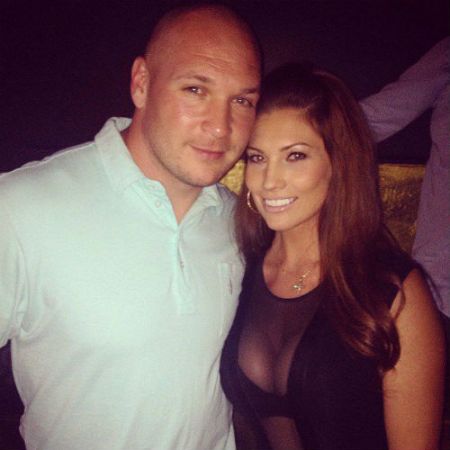 Friend and business partner friend, Jay Glazer, himself helped broke the news, along with several of Urlacher's former teammates, by tweeting congratulations to the 8 times Pro-Bowl winner.

"Welp, turf is real! Congrats to Urlacher & Jenn on their nuptials. Ur right u can't thank me enough for coming."

Frost who is of an Idaho native, first met her future footballer husband in the year 2009 through mutual friends.

Before their marriage, the pair were already having five years of on and off flings in between.

Also Read: Former American Footballer Louis Riddick Yet To Get Married? Know About His Affairs and Rumors

As for the present, the athlete-model duo is currently eyeing to celebrate their third wedding anniversary. But despite the time span, the couple is yet to add their firstborn into the picture.

Prior to dating and marrying, Jennifer Frost, Urlacher has had a handful number of high-profile affairs ranging from Jenny McCarthy, Jenner Evans, Tyna Robertson, and even the famous social personality.

Brian was also married and subsequently divorced while having three children along the way with two different women. 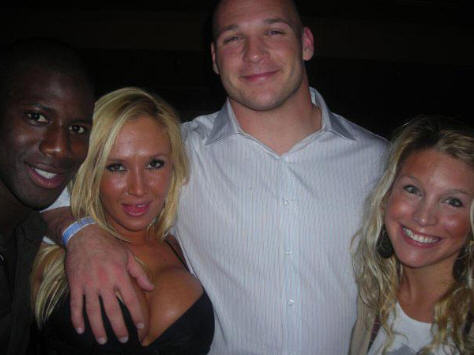 Almost every relationship Urlacher was involved in, often used to come under heavy scrutiny from the public eye and also called into question the football star's character.

The first woman to have been ever put into the love list of Brian was his first wife Laurie Faulhaber. 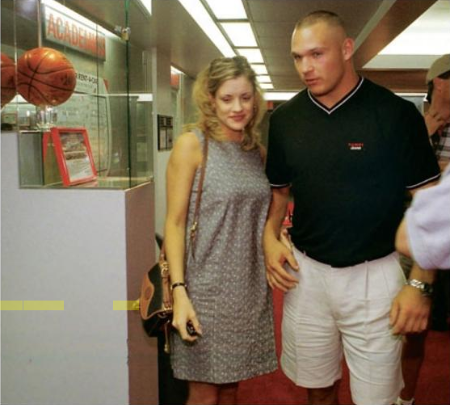 Urlacher married Laurie Faulhaber in March 2000. At the time Brian was only 22 years old.

“He’s the most modest person I know. and he’s the most trustworthy person I’ve ever met…. I feel like the luckiest girl in the world.”

The pair then also bought a house in Lake Bluff, Illinois. Shortly thereafter they had their first daughter, Pamela, on December 13, 2000. Laurie was quick to mention that Brian was extremely thoughtful and considerate during the early portion of their marriage.

Brian was a family man, who was deeply in love. That year, he was also having quite a wave with his football career. Urlacher was named Football Digest NFL Defensive Player of the Year and also finished fifth in NFL MVP voting; however, the Bears lost in the first round of the playoffs.

A year after that in 2002, he broke the Bears all-time record for tackles in a season racking up 151 stops and the same year, he was also rewarded with a nine-year contract worth over $56 million dollars. But despite the surging success, it wasn't all moon and beaches for the NFL legend.

While Brian's career was triumphing on the field, his personal life was suffering so badly that it ultimately led to Urlacher filing for divorce in 2003 with Faulhaber. The very next year, which was after just four years of his marriage with Faulhaber, the couple was officially divorced. Though back then the partition act seemed quite amicable, it was also extremely complicated.

Brian Urlacher love history took a weird turn back in 2003. That’s when he and somewhat known as unpleasant socialite Paris Hilton were seen together in Vegas. 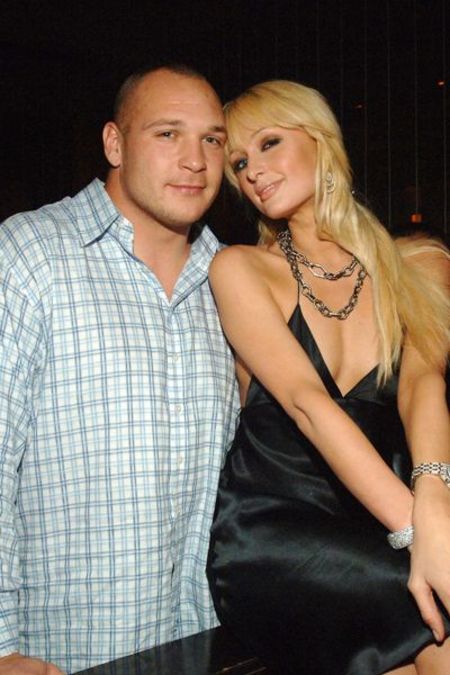 Not long after this incident, Hilton showed up in a Soldier Field skybox at a game wearing Urlacher actual road jersey and was also seen spotting out in a replica jersey.

The Chicagoist stated that alleged, boyfriend response was simple but neither confirmed nor denied anything about his rumored affairs with Paris Hilton.

"We met, had a good time in Vegas, and she came to a game. That was about it. She’s a nice girl. And a busy girl — she goes all out. I don’t know what the big deal was. I was single, and we hung out for a while. I didn’t even see the [infamous] video, man. I should’ve watched it; I heard it was pretty good."

Brian Urlacher explained on his relationship with The Simple Life's star.

After no further substantiation occurred for the famously supposed Hilton-Urlacher's fling, media were almost ready to let go of Brian Urlacher's love topic. And so came Tyna Robertson in 2004. 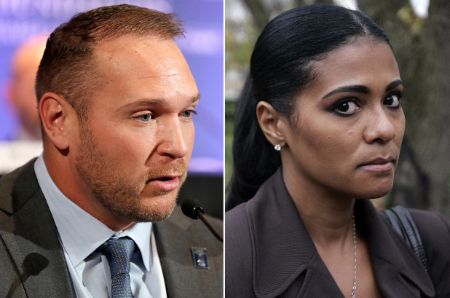 Brian Urlacher and Tyna Robertson
SOURCE: NY post
When Urlacher had divorced his wife Laurie in 2004, she was also due to give birth to her and Urlacher's second child, Riley Urlacher. During the same period, the news was also apparent that the then-husband had a one-night stand with Tyna Robinson. Consequently, this also ended Robertson being pregnant with Urlacher's child.

Ironically, when the revelation came out in the open, Urlacher moved back in with his former wife, Laurie, who then gave birth to her second daughter, Riley, in April 2005. Two months later, Urlacher's one-night partner, Robertson, also delivered a baby boy named Kennedy.

Urlacher immediately hired a lawyer to establish paternity-custody for Kennedy. While that case was still going on, Urlacher and Laurie again split up.

Talk about the present, Robertson still claims Urlacher never wanted to have the child in the first place. She also told the Chicago Sun-Times that Urlacher even offered her a six-figure as hush money to have an abortion when she was two months pregnant with his child.

“That's why gold digger doesn't add up. If I just wanted money, I could have aborted the baby"

“I don’t see her as someone who had a baby to extort money.”

But thanks to all that payolas accusations, the case eventually went on biasing towards Roberston.

“They didn’t really want anyone to know about that, ”

Robertson concluded after the settlement.

The next name on the list of Urlacher's controversial romantic tales was that of a Paradise City actress, Jenner Evans.

Reports have it that Urlacher even purchased a property in Phoenix, Arizona in order to settle down with then-girlfriend turned fiance Jenner Evans. 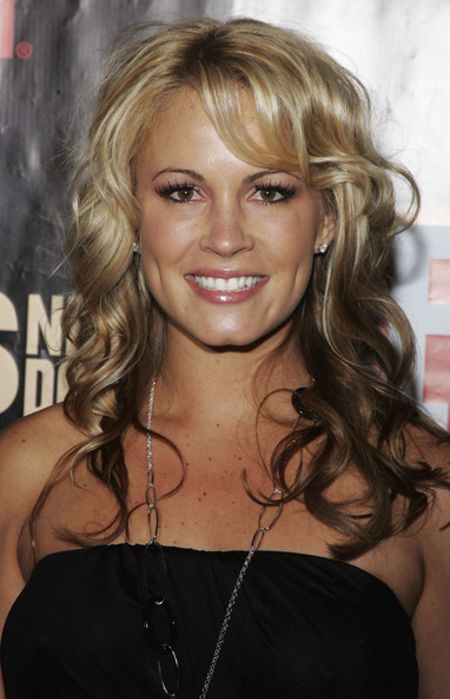 Don't Miss: Ashley Harlan Married Her Boyfriend, NFL Quarterback in 2011 and Shares Three Children With Him

The relationship with Evans has little to no information regarding the details of how they met and what compelled them to break it off. So, Evans, who appeared in various commercials and guest roles on television, at last, seemed to be nothing more, but, just another messy accounts of yet another girlfriend.

In April of 2012, a Playboy model, Jenny McCarthy poured out her heart to the world saying, “I’m giddy about someone.” 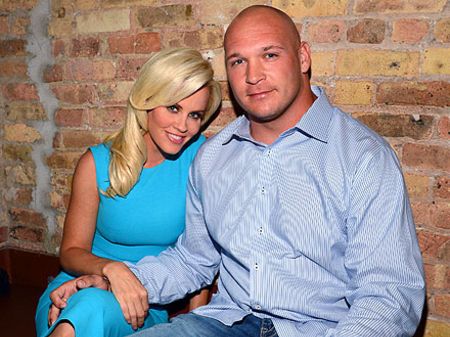 Little did the people knew that McCarthy was actually referring to the Bears’ starting middle linebacker.

but would only add,

Later, People also reported the relationship did happen but only until the couple called it quits in August of 2012.

“Brian and I have decided to turn our romance into an amazing friendship. I will continue to be the biggest cheerleader for him. Go Bears!"

While McCarthy remained tight-lipped throughout their relationship, she at least let the world know about her split with Urlacher. 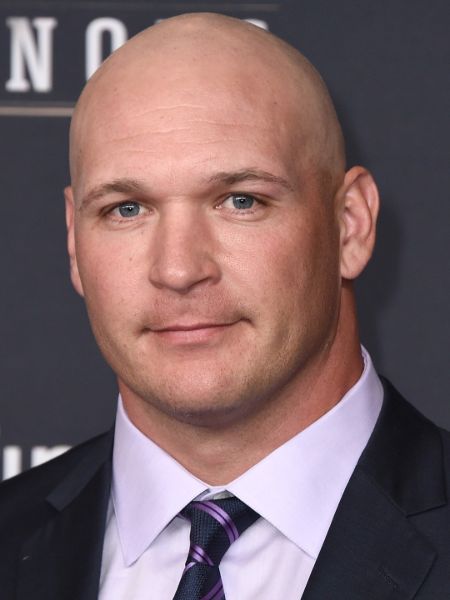