In the wake of Harvey Weinstein scandal and all other sexual harassment scandals in the workplace, the Golden Globes winner James Franco has now been dragged into a sexual misconduct controversy

In the wake of Harvey Weinstein scandal and all other sexual harassment scandals in the workplace, the Golden Globes winner James Franco has now been dragged into a sexual misconduct controversy and this definitely has not pleased all his fans.

A number of women have tweeted against the actor's divisive win claiming that James has sexually harassed them in the past.

James Franco looked proud after winning the Best Actor Golden Globe for his work in the movie The Disaster Artist but just hours after the win a number of women slammed the actor with allegations of being sexually harassed by him in the past.

An actress, Sarah Tither-Kaplan publicly disgraced the Franco claiming that he forced him to do "exploitative" scenes with complete nudity in two of Franco's films with payment of just $100. 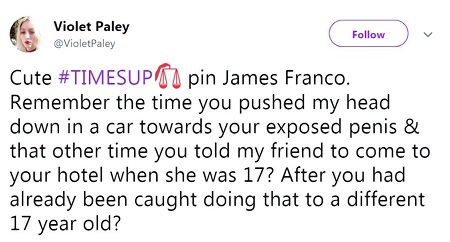 Tither-Kaplan has starred alongside Franco in his short films over three years. She enrolled at Studio 4, Jame's comedy and improv school.

Along with Sarah another woman Violet Paley, also backlashed the actor of pushing her  "head down in a car towards his exposed penis" and "told her friend to come to his hotel when she was just 17."

'Cute #TIMESUP pin James Franco. Remember the time you pushed my head down in a car towards your exposed penis & that other time you told my friend to come to your hotel when she was 17? After you had already been caught doing that to a different 17-year-old?"

Paley who is also an actress/director further clarified that she was an adult but her friend was just 17. Along with her, many other women called out Franco and publicly slammed him for his hypocrisy wearing a Time's Up pin in the ceremony. 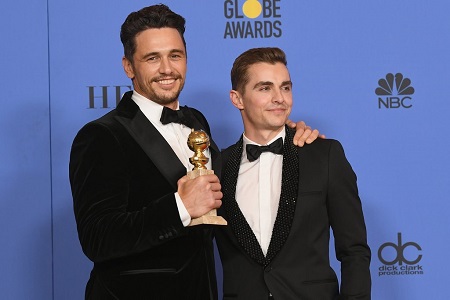 She also accused him of forcing other actresses to play nude scenes and not giving them roles unless it involved nudity. Both Sarah and Violet along with Franco's rep have declined to comment on the news.

Besides them, another actress Ally Sheedy shared a cryptic tweet bashing the actor stating,

"Why is a man hosting? Why is James Franco allowed in? Said too much."

The tweet has ever since been deleted by Sheedy.