Home Article Armenian-American Musician Serj Tankian is Married to Angela Madatyanis Since 2012; What About His Past Affairs?

Armenian-American Musician Serj Tankian is Married to Angela Madatyanis Since 2012; What About His Past Affairs? 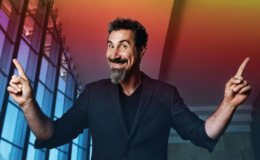 We have often come to witness the multi-talented personalities set the stage on fire with their unique rendition of musical skills and performances without forgetting those crazy mos pits. Serj Tankian is on the top of all that. Those who are unfamiliar who Serj Tankian is, well he is the frontman, songwriter, keyboardist and occasional rhythm guitarist of the iconic metal band 'System of a Down'. But are we familiar with the artist personal life, his early career, and path to stardom his love affairs, past affairs? Behind every musician, there is a story to tell, so least hear the story on one of the iconic figures of Rock and Metal genre artist Serj Tankian and his musical journey.

Metal star Serj Tankian started his career from the year 1994 forming a band called 'Soil' before changing it as 'System of a Down.' The versatile musician was on vocals and Keyboards. After the band splitter, Serj then came with System of Down in the year 1994 Daron Malakian (vocals, guitars), Shavo Odadjian (bass, backing vocals) and John Dolmayan on drums.

The Armenian-American heavy metal band from Glendale, California initially achieved commercial success after five studio albums where three of which debuted at the number one on the U.S. Billboard 200.

Check Out: Michael Griffiths and Joanna Chimonides nightclub kiss gets slammed by none other than Love Island winner, Amber Gill!

The band has been three-time nominated for four Grammy Awards, and their greatest hit song "B.Y.O.B." won a Grammy Award for Best Hard Rock Performance in 2006.

In 2008 Billboard did a piece with me about Holographic touring. Check it out if you can find it online. #tbt

After such commercial success in the music industry, the band went on hiatus in 2006 and reunited in 2010. Since then the band have only been doing stage shows and are yet to release any originals and albums.

Nevertheless, System of a Down has sold over 40 million records worldwide and their two singles "Hypnotize" and "Aerials" reached a number one spot on Billboard's Alternative Songs chart. Another prominence hit of the band includes Chopsey, Toxicity and Lonely Day.

It seems like the 'Chop Suey' hitmaker doesn't want his angel to get into anyone's eyes. Apart from the jest, not much information about his love life's found. However, stalking the rock star social media, we found some snaps of the 'love birds.'

Well, Serj shared those magical three little words to a travel lover and blogger Anglea Tankian. The couple shares a blissful marital life with no extramarital affairs. The lovey-dovey often share their adorable snaps on their social media.

You may like: Learn the interesting details of Swiss football star Admir Mehmedi

On the other hand, Anglea tends to keep her privacy away from the media as she maintains a private profile on social media. Nevertheless, if you want to find more about her, you can request her to befriend here, @madtank. The head over heels lovers is the proud parent of son Rumi.

A repost from @madtank. A relaxed Rumi, our newly born son. #prouddad

The End! Hope you enjoyed the article and learned some never before facts about the iconic rockstar Serj Tankian. Find more intriguing articles of your favorite star on Marriedwiki.