Britni Thornton & Boyfriend Brad Fiorenza Confirmed Their Break Up; Know About Their Relationship And Dating History 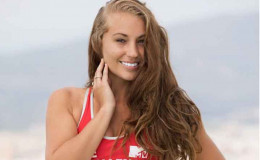 The famous beautiful contestant of the show, The Challenge, Britni Thorton was all up in the headlines when her long-time boyfriend Chuck Mowery dumped her after his injury was all good.

While everyone is still on the page about the romance of Britni and Brad Fiorenza, the couple's romance, sources speculated that their relationship came to an end along with the end of the show. Yes! The Challenge couple has parted their ways. Let's get to know detailed information about Britni Thorton's love life.

Britni Thornton And Brad Fiorenza, 'The Challenge' Couple Broke Up??

Looks like The Challenge stars, Britni and Brad are no longer together!

Britni met her former boyfriend Brad Fiorenza while filming the show The Challenge: Vendettas in September 2017. Their love story began during the filming of the show and continued their relationship until the last season of the show. 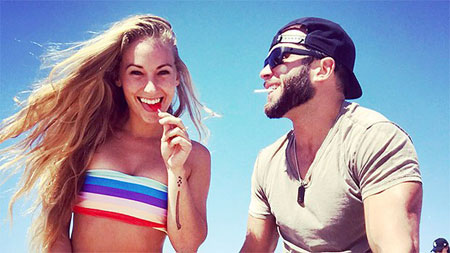 Britni and Brad broke up at the end of the show
Source: Hollywood Life

The Episode on 31 July was a shocking one for the people inside and the viewers where Paul Calafiore, one of the contestants of the show lied to Brad that Britni has slept with her ex-boyfriend.

You May be Interested; The evergreen romance of Salma Hayek and husband Francois-Henri Pinault. Aren't they Hollywood's favorite couple?

Reports claim that the couple split on 29th of July 2018. Brad said in an interview with US Magazine,

“What I had viewed in the last two episodes had made me uncomfortable but it’s not the sole reason for our break up. Brit and I have made a lot of great memories & still have an incredible connection of energy to this day, I really look at it as a timing issue. I was ready to move on, I don’t think she was. I’ll take some of the blame for that.” 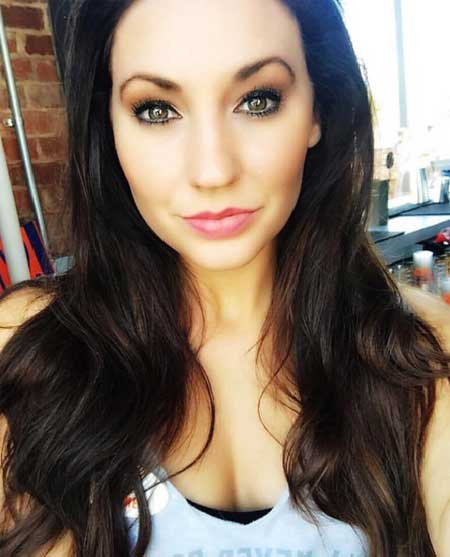 Britni Thornton and Brad Fiorenza dated for a few months before bringing their relationship to an end
Source: Vevmo

The couple parted their ways and Britni currently resides in Georgia whereas Brad lives in Chicago. Thorton has earned a lot of good feedback from the media and public and let us hope we hear some news about her future boyfriend pretty soon.

Well, the star was in a serious relationship for quite a time. Before she was involved with Brad, the star was romantically linked to co-star Chuck Mowery.

The couple was said to have dated since 2010 and they had a lot of ups and downs in their relationships. In fact, Britni was always loyal to her boyfriend during her stay in The Challenge House even with the surfeit of attractive men in the house. 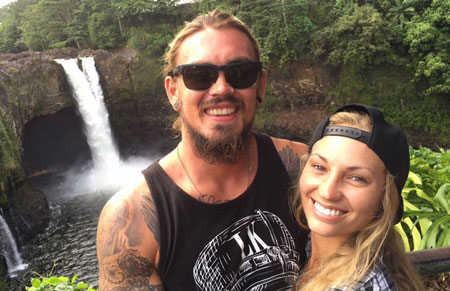 Chuck was suffering from a horrific foot injury where he had multiple infections while Britni was the one taking care of him paying for everything she could.

When Britni returned from Dirty 30 in 2016, Chuck was better with his injury and dumped her, Britni confirmed in an interview. Well, not every man understands the effort by the loved one!

Looks like the list does not just end here. Rumors started swirling around that she and The Challenge vet Derrick Kosinski became an item after a video of them kissing was surfaced. 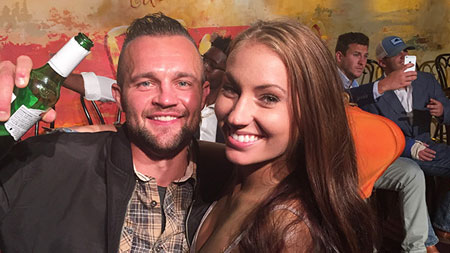 Britni and Derrick dated for a brief period of time
Source: Stop Being Polite

Derrick told in an interview with Hollywood life,

“I felt like I needed to break the ice. When I saw her before the reunion, she had this little pink dress and little cute Princess Leia hair and we just were feeling each other."

The couple denied the fact that they were dating each other but the stars admitted that they text each other every day and we're glad that things were going somewhere. She said in an interview,

“That’s Derrick — he’s a man, and they’re so rare these days. When you find a good one, you hold on to them, even if it’s not that form of relationship. You can’t be friends with Derrick. He’s genuinely such a lover.”

Derrick also has a 9-year-old son whom he always put first which is something that Britni really liked about the guy.

Arrested For Influence Of Alcohol And Drugs, Britni Thorton Did Not Really Care About It!!

The 27-years-old actress was busted on 15th April this year in Georgia. The beautiful star was arrested around 10 pm for the influence of alcohol/drugs and failure to maintain to lane, reports claims. 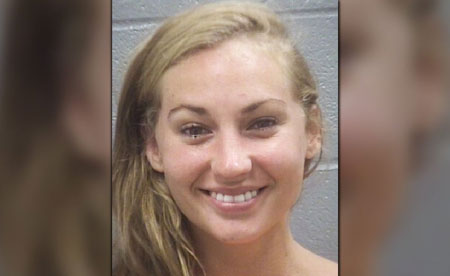 Britni was all smiles after she got arrested in Georgia
Source: NYDailyNews

But the fun part about the case is that she really did not seem too mad about it. The star all smiled in her mug shot. Thorton was released after posting $1,100 bail. 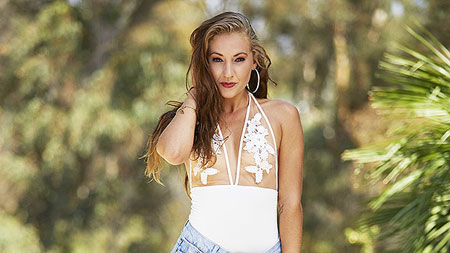