Home Article Canadian-American Actor Will Arnett Married Twice; The Actor Has Had Numerous Affairs; Details On his Personal Life

Canadian-American Actor Will Arnett Married Twice; The Actor Has Had Numerous Affairs; Details On his Personal Life 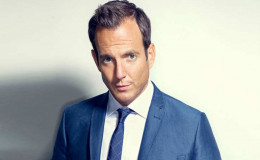 Canadian-American actor Will Arnett is well -known for his performances in Arrested Development and 30 Rock. Though, the actor is successful in his professional life he seems to have a lackluster romantic relationship. Despite being in a relationship with beautiful and charming women; he doesn't seem to have found his one true soulmate.

Will Arnett is currently single and has been married twice. He was in a marital relationship with two beautiful actresses: Amy Poehler and Penelope Ann Miller. Wanna know the details of his marital life, children, past affairs and relationship?

Without further delay, let's find out the details of his marital relationship and affairs.

Actor Will Arnett Is Currently Single Or Dating Anyone?

Will Arnett established himself as a gifted actor with his performances in 30 Rock, Arrested Development, Teenage Mutant Ninja Turtles, etc. Throughout his career, he has acted in over 30 movies, 40 TV series, 13 animated movies, and 6 reality/ entertainment shows. He has even hosted his own show called Netflix: Live in 2017.

The talented actor-comedian Arnett is currently single. In 2018, he hasn't been seen with any other woman in the public. He hasn't mentioned anything about his love life in his social media profiles. 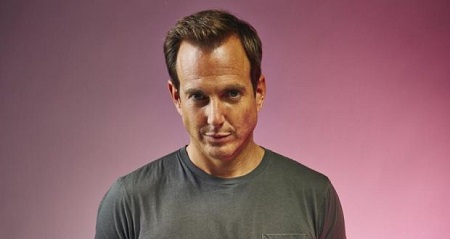 Canadian-American Actor Will Arnett is popular for Arrested Development.
Source: The Irish Times

Will Arnett dated interior designer Elizabeth Law in 2017. He attended Vanity Fair Oscars afterparty with Elizabeth in 2017; confirming his affair with her. As per the onlookers, the pair looked as if they were already married. They even posed for the photograph arm-in-arm; without showing a sign of complexity.

Arnett and Law were not only seen mingling and interacting with the who's who of Hollywood film industry but were seen cozying up with each other during the party. It was claimed that they have been seeing each other ever since Arnett's divorce with Amy Poehler was finalized in 2016. 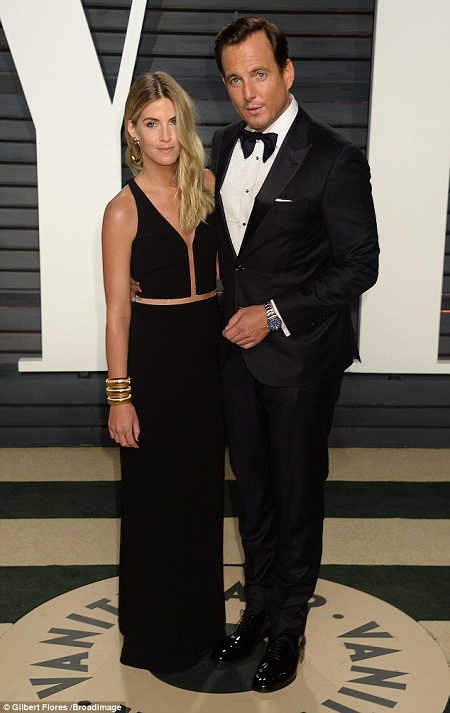 Will Arnett poses for the photograph with his girlfriend Elizabeth Law.
Source: Daily Mail

The two were photographed together shortly after the Superior Court of California officially confirmed the dissolution of his marriage with Amy. On August 25, 2017; Arnett and Law were photographed by paparazzi leaving The Nice Guy in West Hollywood, together in an SUV. At that time, Arnette was in the driver's seat of an SUV and she was in the passenger's side. 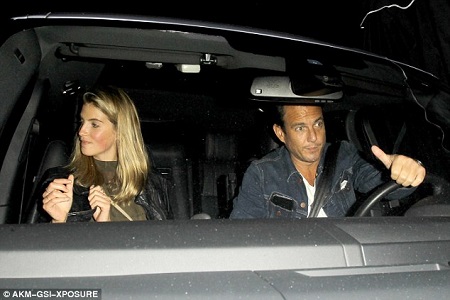 The pair was seen at LAX Airport. Not much detail has been known whether they were arriving or going on romantic getaways. It is claimed that they had a fall-out and their fling was only for short-term. Elizabeth Law used to date Don Johnson's son Jesse.

Before he dated Law, Arnett was romantically linked to the bevy of beautiful actresses, models, and celebrities. During the filming of Teenage Mutant Ninja Turtle, it was revealed by his co-star  Megan Fox that he used to hook up every day with different women.

Will Arnett dated beautiful women like Arielle Vandenberg, Katie Lee, Alessandra Ambrosio, Erin David, and Missy Yager. It is reported that Arnett dated actress Arielle Vandenberg for six months between 2014 and 2015. The pair even made their red carpet debut as a couple during Golden Globe Awards afterparty in 2015. 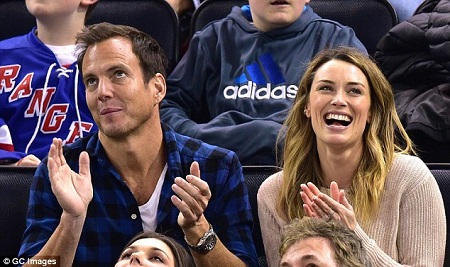 As per the report, their affair was never really serious. During the course of their short-lived relationship, the pair were seen cozying up with each other. They were even seen kissing during an Arizona Coyotes versus New York Rangers game at Madison Square Garden in NYC. The pair decided to split up in 2015. 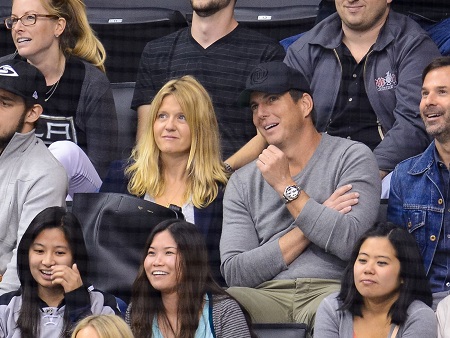 Will Arnett spotted with Erin David during a game.
Source: Daily Mail

Arnett and Erin were seen attending a hockey game. As per the onlookers, they gave vibes of the romantic pair enjoying a casual game together.

Details of Will Arnett's Previous Marriage And Children

Will Arnett married his first wife Penelope Ann Miller in the 1990s. Not much detail has been known about where and when they met each other and how their relationship unfolded. But, it is believed that they met in early 1994 and went on dates. The pair tied the knot in 1994. However, their marriage wasn't meant to be as they finalized their divorce in 1995. The pair didn't become parents.

After their divorce, they moved on with their lives and found love with other people.

Few years after his split with his first wife Penelope Ann Miller, Arnett met Parks and Recreation actress Amy Poehler for the first time in 1996. However, they didn't go on a date in their first marriage.

At the time of their first marriage, Arnett was busy with his projects and Amy was performing with the improv group the Upright Citizens Brigade. 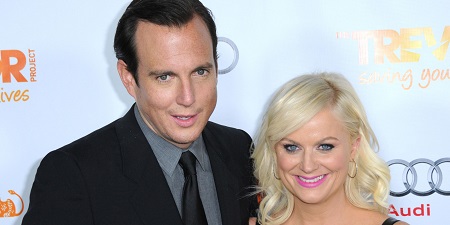 Will Arnett and Amy Poehler photographed during an event.
Source: Huffington Post

It was only in the year 2000, that the pair were formally introduced to each other. Apparently, they were introduced by their mutual friend. The couple didn't mention the name of their matchmaker.

After dating each other for some time, they decided to tie the knot and spend the rest of their lives. The pair officially married on August 29, 2003. They haven't revealed the details of their marriage but, it is rumored that their marriage was a low-key private ceremony with very few attendees. 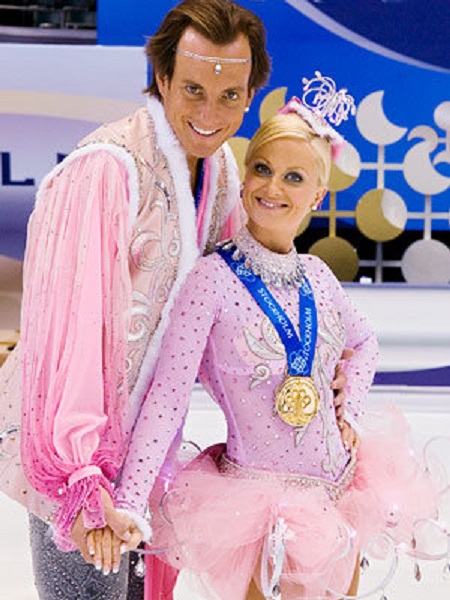 Will and Amy in Blades of Glory movie.
Source: Starz Life

Will and Amy had a steady marital relationship for nine years. They even collaborated with each other and supported one another in good times and bad times. They even appeared in their respective projects as a guest /recurring stars. The couple also acted in Blades of Glory movie together. 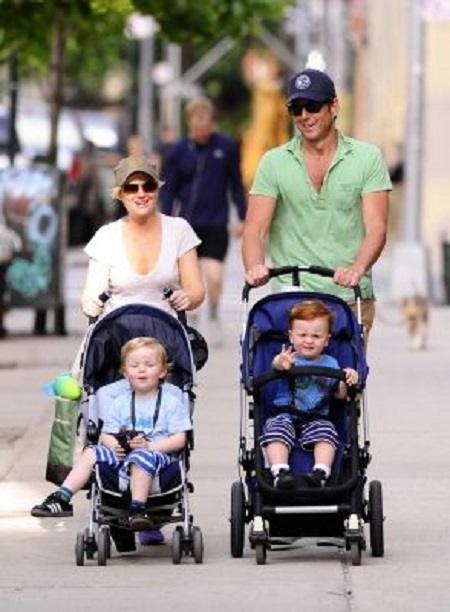 Will and Amy with their sons on an outing.
Source: Pinterest

Not much detail has been revealed about the cause of their split. The pair formally separated in 2012. They claimed they decided to quit their relationship, after feeling fizzling out of their relationship. Some source also reported that their separation was the result of their tiffs, quarrels, Amy's addiction to Cocaine and Will's temper.

The comedic pair lost their spark and the happiness was drained out of their relationship, a source said. Despite their split in 2012, they raised their children together.

On April 8, 2014, Arnett filed divorce papers in Los Angeles Superior Court requesting joint legal and physical custody of their two young children, along with visitation rights. Their divorce was officially finalized by the court in 2016. The Court also dictated that Arnett doesn't have to bear any spousal and child support.

Regarding Arnett, Amy confessed in her memoir "Yes, Please! that:

I am proud of how my ex-husband Will and I have been taking care of our children,” “I am beyond grateful he is their father, and I don’t think a ten-year marriage constitutes failure. That being said, getting a divorce really sucks.”

Will took to the gym and reshaped his physical attributes to deal with his divorce. Despite his two failed marriages, the actor is hopeful for the third marriage; and hasn't lost his faith in the marriage. 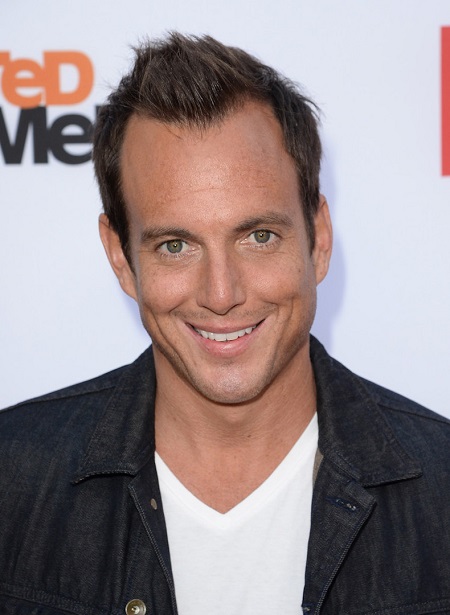