Home Article Carrie Preston,age 45, and her husband Michael Emerson are together for 18 years. See their relationship.

Carrie Preston,age 45, and her husband Michael Emerson are together for 18 years. See their relationship. 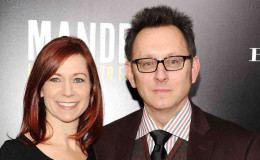 The couple has been together since 18 years.They have managed to balance their personal and professional life with immense love and care.

Carrie Preston and her husband Michael Emerson have shared 18 years of their life together. The couple first met in 1994 and got hitched in 1998.

Carrie Preston and Michael Emerson dating history: How it all started ?

The couple first met at the Alabama Shakespeare Festival during a production of Hamlet. It was the year 1994 when Michael was studying conservatory and Carrie has just come from New York to play Ophelia.

It was a love at first site for Emerson and he immediately purposed Carrie with flowers and peaches waiting outside her door.It impressed Carrie and the love blossomed.

Carrie was quite impressed by that gesture and then the love finally blossomed.

After dating for four years, the couple decided to exchange the vows. Their marriage was held on September 5, 1998. They do not have any children at all.

They do not have any children yet. Currently, they are busy with their career goals and have not thought about having children so far.

The couple is happy with their married life

She says absence makes the heart go fonder, and they enjoy the time they are together because they know inevitably they are going to have some time apart.

Her husband, Michael  Emerson supports this thinking of Carrie. He says they have been together for 17 years as husband and wife and their love for each other is still growing and they are still learning from each other.

Carrie Preston's thought about having children

Recently Preston and her husband are busy with their careers.they have not  planned for having babies yet. In a sense, Carrie feels things will be easier if they do not have children.

In an interview, she said, 'We do not have children so it has made it easier for us to move between things. I think that it is helpful to the relationship between us. We have a little dog that we share and we love and it completes our family.'

Fixing to watch the final episode ever of #personofinterest #familyviewing @poi_cbs

Seems like the duo is not interested in having children right now. It would be a great news for their fans if they changed their mind anytime sooner.

The couple's thought on working together

According to Carrie, it was fun working with her hubby in 'Person of Interest'. They do not get enough time for each other at home.

If they share same work, they would get time for each other which lightens their workload. She revealed that her husband has helped her in most of her works.

Michael Emerson also loves working with his wife Carrie. He feels they are like teenagers while working together.

He said, "It's a little tricky, and it feels kind of odd," he continues. "I think it makes us both feel a little self-conscious. We feel like teenagers, I think when we do scenes together. It's hard not to crack up!"

Emerson further reveals that it feels little difficult to disregard their relationship in front of rolling cameras. "I have to kind of erase her wife-ness, and replace it with the character-ness."

They make a good pair on-screen and off-screen. They are surely a 'made for each other' couple.