Home Article Caterina Murino is having an affair with Rugby Player boyfriend Pierre Rabadan. Are they getting married?

Caterina Murino is having an affair with Rugby Player boyfriend Pierre Rabadan. Are they getting married? 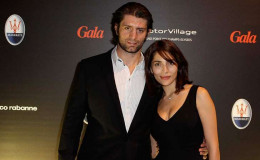 Caterina Murino is an Italian actress, who rose to fame after playing in the 2006 adaptation of the James Bond novel Casino Royale, as Solange Dimitrios. She initially wanted to be a doctor but later she changed her mind and began her Television career in 2002.

All has been talked and gossiped about this hot and sizzling Italian actress Caterina Murino. However, the most awaited news about her life is her alleged affair with even hotter boyfriend French Rugby Player Pierre Rabadan.

We don't want to miss this piece of information. So, today we will reveal everything about the love story of this couple. Murino, who finished fourth in Miss Italy contest of 1996, became internationally renowned for her role as James Bond lover, cast as Solange Dimitrios in the 2006 adaptation of the James Bond novel Casino Royale seem to be living an even more successful personal life.

Caterina is enjoying all the attention of the media, particularly, French media as she has become the 'face' of Omega watches, a muse to designers Dolce and Gabbana and a goodwill ambassador for Amref, as well.

However, what makes this beautiful Italian actress really happy is her wonderful relationship with her boyfriend Pierre Rabadan ,30 who is a French international rugby union player, playing for Stade Français.

The duo lives together in a flat in the Montmartre district in Paris. Although she thinks French food is not her platter, she considers France her second home, all because of Pierre.

They have been dating for almost 8 years and despite such long years of relationship, we are not hearing any wedding bells!

On an article written by Mail Online for DailyMail, Caterina shared everything about how she first encountered her darling Pierre for the first time.

She told the sources that they first met at a charity event and both of them got along quite well. Later on, both started going out and one thing led to another and eventually they finally were committed in a relationship.

She also quoted that, both were in search of someone to share their loneliness with and their first meeting was a good timing.

Caterina often goes to Pierre's games although she has no idea how the game works and she screams and cheers for him a lot.

Similarly, she also does not want Pierre to get hurt/injured and is always worried about his health. This shows how truly she loves and cares for the man of her life.

Here are some Instagram embeds of Pierre's union games.

However, the actress also revealed that the only problem they have is a lack of time for each other as both of them have busy schedules in their respective fields.

Whenever, the couple gets time, they fly back home immediately and spend a lot of quality time like going on night outs, or long vacation and that's how they have worked out their relation which seems to be going pretty well.

The duo has not expressed anything to the media about they tieing the knot sooner or later. But Caterina once told the media that she would definitely love having children one day.

She added with more emotion that she always has the desire of re-creating the fantastic family she grew up with.

She is blessed to have a wonderful family, with her father and mother who are still in love and that's what she wants in her life too.

So, this could be a very good sign of the couple getting married and having children together and living like a perfect family.

Well, we do hope for the same. All in all, their love for each other have grown to the fullest since the day they met and all it require is committed married life and Voilà!! we have a perfect family.