Cecily Tynan divorced her husband Michael Badger, who is she dating now? 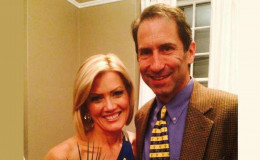 An American WPIV-TV reporter Cecily Tynan was married to Middle school Spanish Teacher Michael Badger. Even though the couple loved each other a lot, unfortunately, they got a divorce.

Today we are here to talk about Tynan's personal life. Is she married or dating anyone after her separation? Let us find out.

Cecily Tynan and her former husband Michael Badger were high school Lovers.  The duos Love story began from high schools days and after dating for several years they tied the Knot.

During that time everything was going on as per their desire but unfortunately, due to their personal differences, they got separated.

Tynan and Badger got a divorce in February 2004. The real reason for their divorce is still very mysterious.

They were almost together for eight years since their high school days. Well, all we can say is that some relationships do not have a happy ending.

The couple does not have any children. A year Later, Tynan again got engaged to Greg Watson.

After separating from Michael, she got engaged to Greg Watson, an investment banker in 2005. The couple also got married in the same year.

At present, they are living happily with their two children. The pair looks adorable and seems like a perfect match for one another.

They both seem to have a huge interest in athletics and has also seen competing against one another in duathlon, in the past years.

During the 11 years of their successful marriage, the couple has been blessed with two Children; a boy and a girl.

#TBT to my brother's wedding 5 year ago. I can't believe how little my children were back then. #timeflies pic.twitter.com/6Ba3acGufL

Currently,  Tynan is living a life of her dream and we wish her to have even more happiness and success in the coming future.

A woman from South Philadelphia accused 50-year-old 6ABC meteorologist Tynan of assaulting her at a U2 Concert at the Wells Fargo Center in June 2018.

The Philadelphia Police Department confirmed that police were called to investigate on the issue involving the 28-year-old woman and the American television reporter.