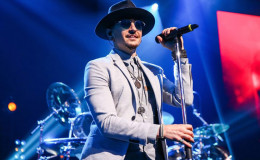 Chester Bennington's Unfortunate Death; Commits Suicide; See his Journey as a singer, husband and father and the cause behind his death

And it seems like 2017 is here to bring sad news to the entire music industry.

After the shocking death of Soundgarden and Audioslave Frontman Chris Cornell on May 17, 2017, another legendary singer of the world famous band Linking Park, Chester Bennington has sadly passed away in his LA home committing suicide!

The entire family and band members are in great sorrow and mourning over the devastating death of this famous singer.

Today let's take a moment to see the journey of this beautiful soul as a singer, a husband, and a loving father.

One of the most hit nu metal bands of the 2000's, Linking Park's lead singer Chester Bennington was found dead inside his home in LA on Thursday.

Sources report that the cause of death was deliberate suicide as he was found hanging in his room and the first one to witness the incident was his housekeeper. 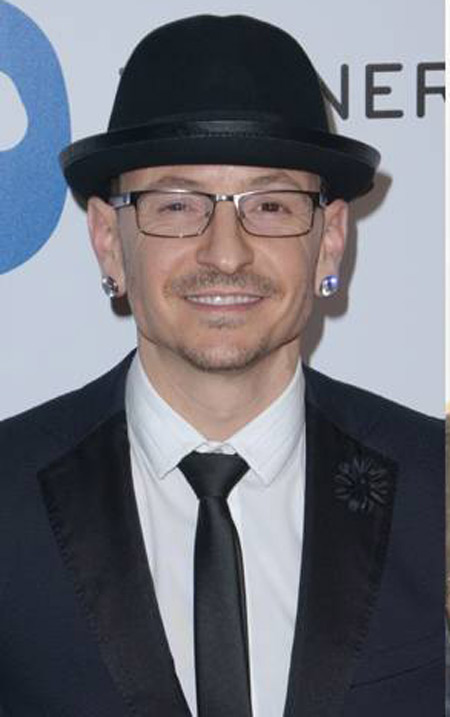 Chester Bennington is dead at the age of 41, Source: Perez Hilton

Band member Joe Hahn along with other family members rushed to his home after the incident and out of rage they even flipped fingers to the paparazzi outside the house of Chester.

An inside source revealed that Chester was under a lot of emotional stress and depression after the death of his close friend, Chris Cornell and Chester coincidently took his life on the late Chris Cornell's birthday. 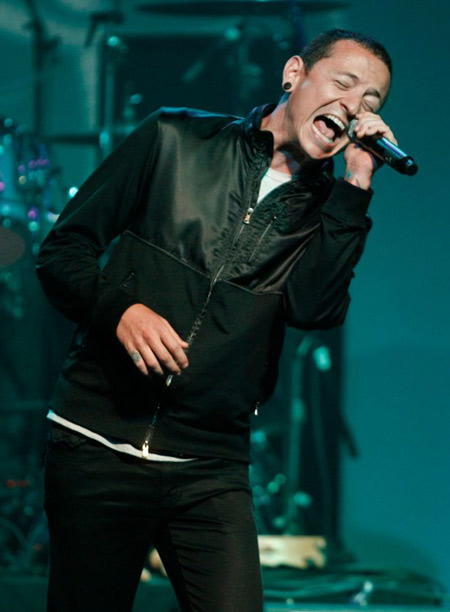 Chester Bennington died as the result of suicide, Source: IBTTimes

TMZ was the first to break the news on media that stated that Chester's dead body was found in his private home, hanging from the ceiling in the upscale Palos Verdes neighborhood of LA.

The Los Angeles County Coroner's office reported a call after 9 am confirming a suicide incident at Palos Verdes Estate area.

The band members, as well as all the near and dear ones of the late singer, are in deep shock and sadness.

"Shocked and heartbroken, but it's true. An official statement will come out as soon as we have one," wrote the lead guitarist, Mike Shonda on his Twitter. Similarly, Dave Phoenix Farrell simply wrote, "Heartbroken."

Shocked and heartbroken, but it's true. An official statement will come out as soon as we have one.

And everyone from the music industry took Twitter to pour their heartfelt condolences for the late singer.

Seeming to be happy is never enough. RIP @ChesterBe pic.twitter.com/hZ9dSB8Sou

Chester was one of the kindest men I've had on my show. My heart breaks for his family and friends. He will be missed terribly.

Each time I was lucky enough to be around @ChesterBe, he was an encouraging, positive force. Rock and roll will never fill the space he left pic.twitter.com/asceRPvEuX

Linkin Park was my first concert. Chester Bennington is the one inspired me to become a singer... Im devastated

Chester who transformed himself from a troubled teenager to a singing sensation was happily married to his wife Talinda Bennington with three children and now his unexpected and untimely death has left them in great pain.

Chester Bennington's hard, rageful yet mind blowing music leaded hearts of many during the early 2000's. His music was pretty dark, that expressed much about his personal life.

When he was just 11, his parents divorced and he went on to live with his father. His father was a police detective specialized in solving cases of child sex abuse.

But the irony that hits us hard is that he, despite being the son of a detective could not confess that he was sexually abused for two long years by an older male friend.

Not only this, he was a hard drug abuser and a raging alcoholic. He abused all kinds of drugs, marijuana, alcohol, opium, cocaine, and LSD.

When he finally confessed about his sexual abuse when he was 13 to his father, he asked him not to take any consequences after knowing that the abuser was a victim himself.

His condition went worse day after day and the entire thing caused him much stress that he once even thought of killing everyone and running away.

However, when he started living with his mother he quit using a drug, went to rehabilitations many times.

A CALL TO ARMS: The only way to win a war Is unrelenting peace No matter what the cause The violence will not cease Death breads only dying We always have a choice Peace won't stop your crying But tears still have a voice We may always disagree But questions long for answers Close your eyes you'll never see The war machine's a cancer A parasite that eats your soul Leaving nothing but the grave To those who keep on digging For those who won't be saved This is a call to arms Fall into one another This is a call to arms To wrap around each other

In spite of all, he was still bullied and beaten up in high school. In a public speak show, Stand up To Bullying, Chester revealed that he was intensely bullied in school. He stated,

"I was knocked around like a rag doll at school, for being skinny and looking different."

But after rising to fame through his band, he chose sobriety and a different path for himself.

Having a passion for singing since an early age, he started singing for a local band called Sean Dowdell and His Friends and also released their first track cassette in 1993.

But, the band didn't turn out as expected and Chester left that band. Chester was thrashed back into reality and he became hopeless about his singing career.

However, this got finally better when Jeff Blue, the vice president of A&R in LA asked him to work for a band, Linking Park.

They formed the band after much struggle and rejections, finally got to sign the record deals with Warner Bros, Records in 2000.

After that the singer and his band became a sensation with their hits like Numb, In The End, Crawling In My Skin, Point of Authority and much more.

Recently, he was on Europe Tour with his band reunited and just hours before his death, the band released their new album One More Light.

Past relationships and married life

Bennington was married twice and prior tying the knots he was in the relationship with his girlfriend Elka Brand with whom he has a son, Jamie.

Then, he married Samantha Marie Olit, his first wife on October 31, 1996, in a private ceremony and gave birth to their son, Draven Sebastian Bennington on April 19, 2002. 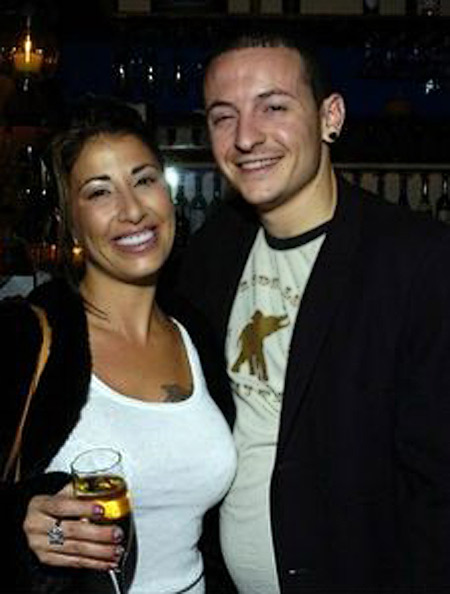 While his career was rising at peak, his personal life shattered in bits and pieces and the bitter couple finally got divorced in 2005.

After that Bennington married his current wife in 2006, a PlayBoy model Talinda Ann Bentley with whom he shares three children, Twins Lilly and Lila born in 2011 and son Tyler Lee Bennington. 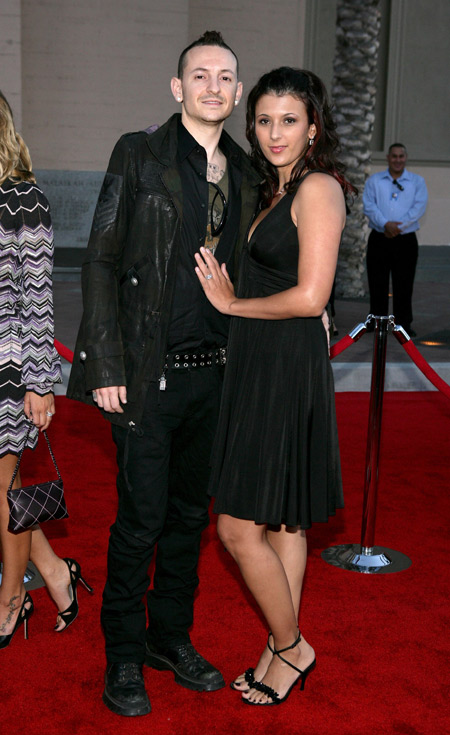 Chester with his second wife Talinda at a red carpet event, Source: Pinterest

The pair was incredibly happy together and was going strong for almost a decade but now Talinda is left with a corpse of the singer which once used to be her loving husband and proud father of children. 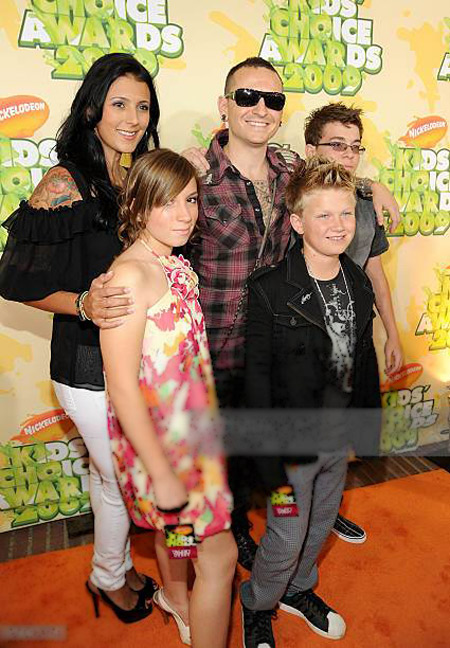 Chester with his wife and three children, Source: Getty Images

Our sympathy and prayers to the bereaved family of late singer Chester Bennington.

"Suicide is not a Remedy".

If you or your loved ones need help than you can contact on National Suicide Prevention Lifeline contact 1-800-273-8255.